During my four years in the UK I had some painful moments when birds I needed for my Israeli list showed up. Prime example was Pink-backed Pelican. It is actually not THAT rare in Israel, with about 14 records. It was also never a difficult bird to see in Israel. Some individuals were actually long-stayers, but I was always away when they occurred. It remained my bogey bird - that big gap in the list. Then came those four years when I was in the UK - several individuals porned themselves completely, as if just to spite me.
A couple of weeks ago a young Pink-backed Pelican was photographed in the Hula Nature Reserve (identified retrospectively from photos). I started revving the engine, but no further news. Then a few days ago, the same photographer did not identify it in the field, again. News from the reserve staff confirmed it has taken up residence in the reserve, so game on for me.
Yesterday I finally had the opportunity to go. Early morning report from the reserve was worrying - it was seen taking off with a passing flock of migrant Great White Pelicans. I decided to take my chances (rather than drive down to Eilat to dip on Arctic Warbler) and headed up to the Hula Valley. I forged through holiday traffic, and made it to the reserve two hours before closing time. Luckily, my connections with the reserve staff offered me a unique opportunity to see the mini pelican from up-close. It was just about viewable from the public boardwalk, a looooong way away across the main lake. This is how it looked like - you will have to trust me on this, it's the second bird from the right. 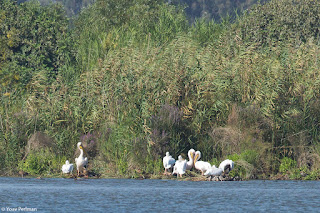 So here it is. My Israeli list is +1. Bogey bird laid to rest. 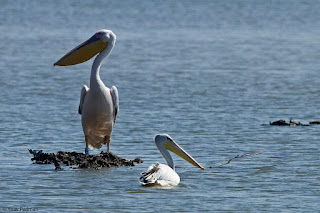 Though I was totally focused on the pelican, and it was a very hot day, the reserve was in good form with loads of birds, and the skies were full too. Check my eBird checklist here.
פורסם על ידי Yoav Perlman ב- 9:26 PM