Yestreday I had a meeting at Ma'agan Michael - perfect excuse for some birding at this fantastic site. I could not leave home properly early so managed only a lazy drive-around in the late morning heat with Nadav. Yet it was a productive 1hr 43mins (see my eBird checklist here). Highlights were a Black Tern, and two Penduline Tits. Most 'interesting' was this apparent dark morph Little Egret, that has been present there for a couple of weeks at least. It was a bit distant, and stood up in an awkward posture, extending its neck. Yet, still with this neck extension, it lacks the obvious angular shape of Western Reef Egret. While bill seems to be on the long side, it is pretty thin and very straight, unlike the dagger-shape of Western Reef Egret. The slightly blotchy head pattern looks quite typical to those 'dark morph Little Egrets' I found on the web. 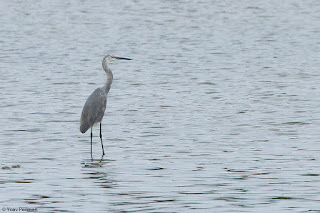 Its legs were properly dark, lacking the yellow stuff Western Reef Egret often has on the rear tarsus. In flight, it showed white outer webs to primaries, and some white scapulars. 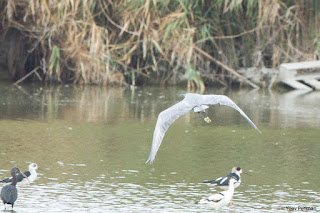 All in all this bird structurally looks like a rather standard Little Egret, and bare parts look OK too. But what is it?

The provenance of dark morph Little Egret is still a bit of a mystery and I have not found any genetic studies confirming the existence of this dark morph,  excluding a hybrid Western Reef Egret. There's a slightly old 1995 paper in British Birds by Dubois and Yesou (see here) suggesting that such a morph does exist, but a recent 2017 Ducth Birding article by Koparde and Yesou suggests that at least those similar-looking individuals in the Indian Subcontinent and hybrids. There are proven records of hybrids around the Mediterranean. Is this bird a hybrid too? Or does the dark morph Little Egret actually exist?
פורסם על ידי Yoav Perlman ב- 6:51 AM