I have a long back-log to catch up with, so without further ado, here we go:

A week ago we left Norwich and started a three day long road-trip to Shetland. We stayed one night with our good friends in Filey, Mark and Amity. A quick morning birding session at some of Filey's best wetlands produced, well, not too much. Merlin was a good local bird 😊 And Mark was really impressed by eBird. Bird recording is actually great!
After another day on the road we stayed overnight in Edinburgh. Then another short ride to Aberdeen, to catch the ferry across to Lerwick. Beautiful weather made staying on the deck pleasant, for a while until the kids demanded food. There were Bottle-nosed Dolphins and Harbour Porpoises in the bay, some Goosanders, Kittiwakes etc.
We were extremely lucky with the weather during our entire stay on Shetland. After we left the ferry and drove down south to our hosts in Sumburgh, we became aware of an Orca pod heading south from Lerwick along the coast. When we got to Roger and Agnes's. it was soon time to head out and intercept them on the nearby headland. 2 minutes walk from the house, 3 minutes wait and - boom! Orcas spotted. They swam in extremely close in, hugging the coast, into the smallest inlets, searching for seals. Adrenalin was rushing. Cameras were clicking. What a fantastic show. So much more impressive compared to the distant views I had in Vancouver last year.
It was a group of four individuals - a huge bull, a female he seems to fancy in recent times, another female and a cub. The bull is well known here - his local name is Busta. He's been seen in Shetland for about 20 years now. This pod travels regularly between Shetland and Iceland.
At first we all watched them from a small hill overlooking the bay, but quickly I deserted my parental duties and scrambled down a cliff to get closer to water level. They passed so close to me. I heard them breath. They splashed water with their tails (to disorientate seals) and I felt the spray. Simply breathtaking. 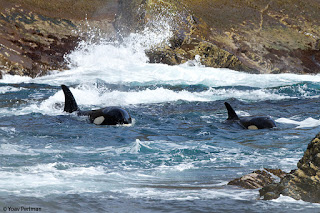 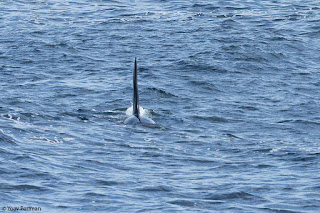 Tasty Tystie snack in the background 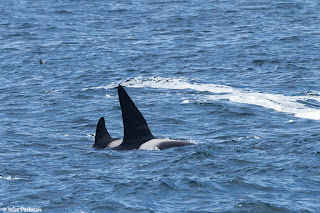 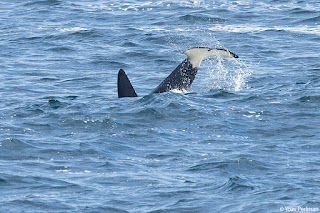 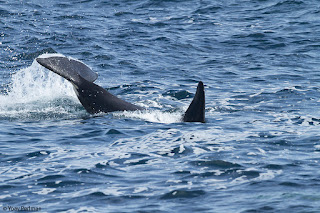 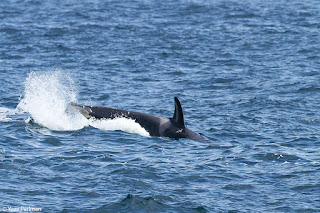 They passed so close to shore, searching for seals hiding in the tiniest crevices, practically climbing on rocks: 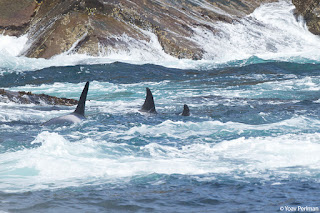 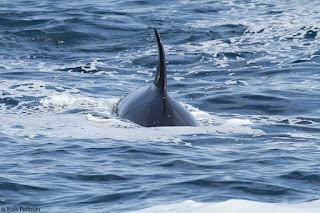 Before heading off south they started jumping our of the water together, apparently just for fun. Incredible. 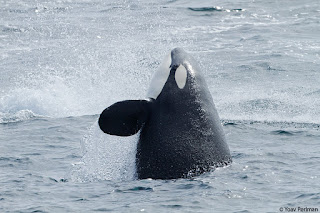 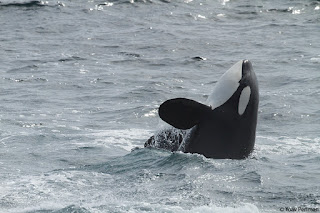 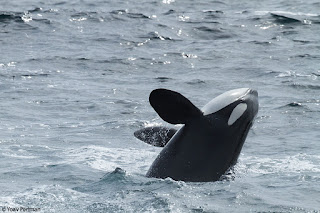 Then they toured the entrance to Pool of Virkie, right by the airport. They were enjoyed by many admirers on Sumburgh head too, before heading up north along the west cooast. 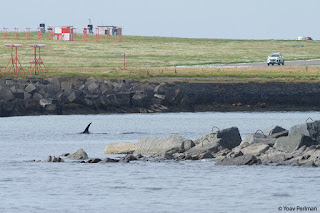 We were so fortunate to encounter Orcas barely two hours after landing on Shetland, and even more by experiencing in such intensity. Simply one of my best wildlife experiences ever. Wow. It's been almost a week since, but Adrenalin is still rushing when I go through my photos. 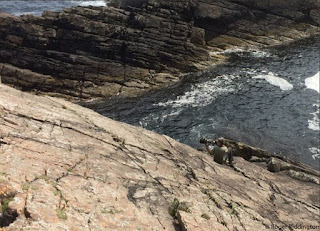