Another Birdfair done and dusted. As every year, I worked for my Israeli organisation, Society for the Protection of Nature in Israel, to showcase our conservation work in Israel and promote birding tourism to Israel. This year our team included Dan, Jonathan, Noam and Tsadok from IBRCE, Nadav from Hula, our Godfather Yossi Leshem and his wife, Richard and Anette - quite a team! It felt like a family reunion to be together with my old friends. And they provided free, extended babysitting services 😃 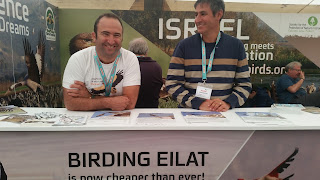 Our main efforts this weekend were geared towards Champions of the Flyway - recruiting teams for next year, meeting sponsors and increasing the reach and impact of our project. We had a huge and highly successful event on Saturday night to celebrate Champions - success stories from previous recipients about the birds saved using COTF funds (see example here) were truly inspirational. The event was endorsed by our partners at BirdLife International, and CEO Mrs. Patricia Zurita's words touched everyone's heart. Here is Dale Forbes from Swarovski Optik temporarily handing over a new pair to John Kinghorn of Youth Africa Birders. In COTF 2017 they won the titles 'Knights of the Flyway' and 'Guardians of the Flyway', and donated this pair to Doga Dernegi (Birdlife Turkey). 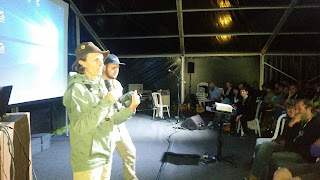 Then the new COTF movie by Yuval Dax was unveiled - brilliant movie:

The celebration ended with a fab live gig by the wonderful Morning Bride and Bill Thompson III of The Rain Crows.
On a presonal note, Mark and Amity are dear friends and my family spent much of the weekend hanging out with them - huge pleasure.  This is from an intimate fringe gig they did on friday: 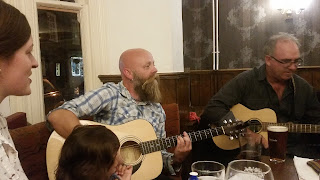 As we have done in recent years since our move to the UK, I was joined by my family which was great fun. Here is my son Noam with Prof. Yossi Leshem, very pleased with himself after winning a beautiful prize draw - stunning artwork by the tallented Jo Ruth: 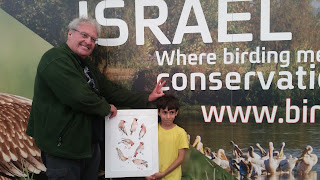 Here are some more personal highlights from the weekend, all with phone camera so sorry about poor quality. More photos, mainly even-poorer selfies, are on my Facebook wall. 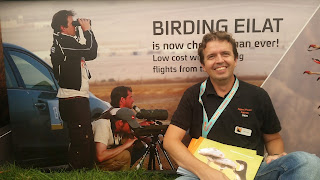 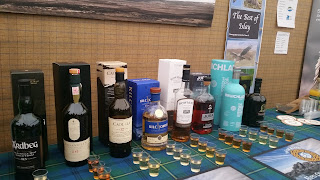 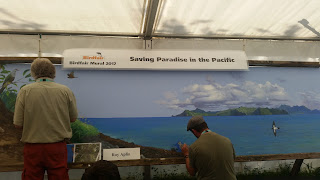 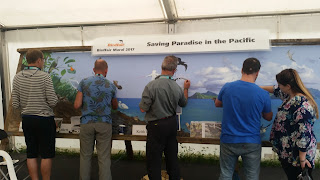 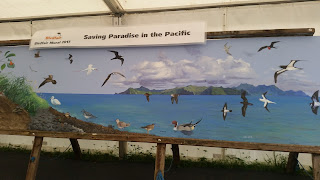 From a personal point of view, it's an empowering but exhausting event. Empowering, because of the strong sense of a large, powerful conservation family I belong to. Exhausting, because I talked, and smiled, non-stop, for three full days. On Sunday the effects of this constant chat and smile were evident on the faces of all exhibitors. Thousands and thousands of people walked past our stand, many stopped to talk; a 100m walk to the toilet or for a coffee could take an hour. But the rewards are great. Some cynical souls may keep away from Birdfair, but for me these connections and networking opportunities with friends and colleagues from around the world are invaluable. And great fun.

Using social media, online criticism by 'anti-Birdfairers' against the commercialism of the event, and the Celebrity-selfie culture that is picking up, with the increasing virtual 'power' of birding and conservation 'celebrities'. I understand this criticism, and for a person who feels at his best when I'm birding, outdoors, three days of intensive shoulder-rubbing is not my natural passtime. However, I must confess, I like selfies; it's always a slightly awkward moment, and very often they look bad because they are taken with the poor reverse camera phone. They look almost-alright on phone screens, but on computer screens they look awful. But in today's social media world, selfies are almost a necessity. And in selfies people normally smile, and hug, which are two positive activities IMO. My kids were really keen to spot big TV starts such as Chris Packham and Steve Backshall, like rarity-spotting. They were thrilled that I had a meeting with Chris Packham - so had to grab the selfie-opp, and an autograph for the kids. This is by Jonathan: 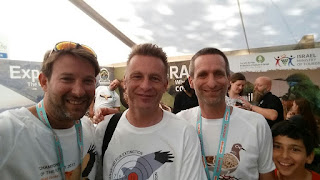 Arjan Dwarshuis, with whom I spent some time in Israel during his incredible Biggest Year in 2017 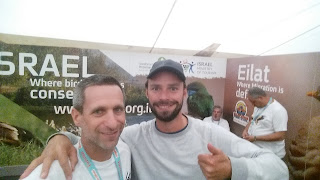 After all, selfies are part of the game. All those who work in the interface between birding, conservation and 'The Public' need to use social media in this way or another. I don't think that my selfie with Chris or Arjan increased my 'public leaverage', if there is any. But looking at the Big Picture, these are the 'rules' in the world we are working in.

Another slightly less pleasent aspect of Birdfair is the occasional expression of anti-Israeli opinions towards us during Birdfair, by casual visitors and also by some 'higher-ranked' figures in the birding industry. The main argument to try and weaken Champions of the Flyway is the support we get from Israeli Ministry of Tourism. Even though I do not enjoy listening to this often uninformed criticism, the only thing I can do, and my colleagues too, is to shrug our shoulders and try even harder to do our best to promote cross-border collaboration for Bird Conservation in our region. We have been doing it for many years, because we believe it's the right thing to do. If some people get confused and fail to identify that we try to be the 'Good Guys', despite what they think about the Israeli Government's policy, that's alright with me. And when people approached me during Birdfair and started a conversation of bigotry and hate, I used my good British manners and thanked them very much for their kind words.