Yesterday I joined Arjan Dwarshuis who is doing a global big year. Contra Noah Strycker who skipped Israel in 2015, Arjan made the correct decision and spent 2.5 days in Israel, clearing up local restricted-range speciaties and lots of migrants. Yesterday afternoon we met up first in Yeruham. Arjan was with Oz. We had there some new birds for Arjan's list but fewer migrants than we expected. Spotted Crake was nice. Then we headed down into the Rift Valley. First stop was in the wonderful Navit ponds, south of the Dead Se Works. The place was packed with birds. Important species for Arjan were Dead Sea Sparrow and Baillon's Crake. The sparrows were present in large numbers - more than I have ever seen there, singing, nest building and offering great views. This male was Arjan's first this year: 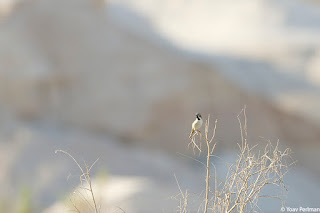 The crake was well-spotted by Oz. I am sure the site holds many crakes but they are difficult to see. This was the only one visible - and the scarcest of the crakes in Israel, good stuff. I also saw very briefly an African Swamphen - 99% sure. Other highlights were breeding Ferruginous Ducks, several singing Clamorous Reed Warblers and a good selection of migrant ducks. 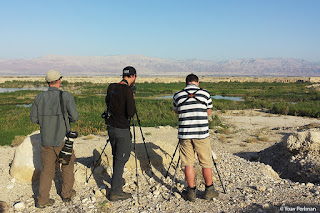 Before dusk we checked a nearby wadi where we added some common desert species such as Trumpeter Finch and Sand Partridge.
The night session was very successful. We had a great time with Nubian Nightjars, and then we had a breathtaking performance by a male Desert Tawny Owl that just wouldn't stop singing for us. Not only Arjan was in heaven. 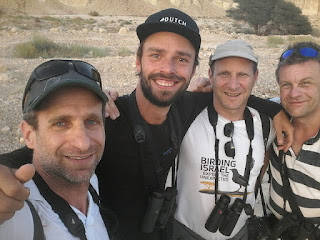 I had a great time with Arjan, Oz and Andy, and am very happy that I contributed something to Arjan's big year.
Good luck to Arjan in the next legs of his quest. Up till now he's doing very well, and I hope he can keep up with his excellent pace until the year ends.
פורסם על ידי Yoav Perlman ב- 11:05 PM