Raptor migration through Israel is picking up these days. The boring days of Honey Buzzards only are over, and now migration is much more varied, with two globally sensitive species, Lesser Spotted Eagle and Levant Sparrowhawk, passing in large numbers now.
Today I joined the team of our Soaing Birds Count in the Jizreel Valley, coordinated by IOC (myself and my colleagues) and supported by IAF. But first I had a couple of hours for birding in the Bet She'an Valley, that got slightly extended because I got bogged with my car in the sand plus my car battery died. This slowed me down but eventually I had a nice morning with lots of birds in the fields and fishponds. Also down in the valley raptors featured well. Tons of Black Kites already, plus many harriers, Short-toed Eagles and quite a few Ospreys around.
Marsh Harrier in nice setting 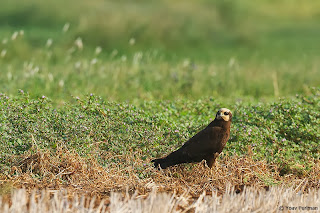 Osprey feeding on a fish caught in the fishponds - with the ever-loyal companion Hooded Crow: 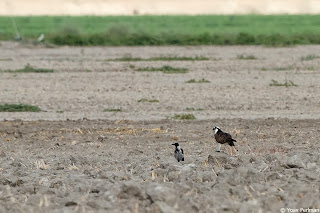 Many hundreds of Black Storks hanging around, some moving south. Found this lovely Czech-ringed adult in Kfar Ruppin fishponds: 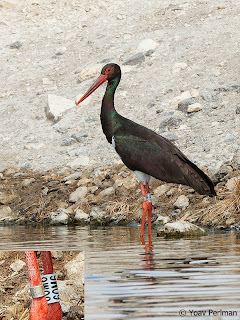 Lots of migrant passerines around - Yellow Wags, Willow Warblers, many shrikes, Whinchats, wheatears etc. Worth noting were two Richard's Pipits, one Blue-cheeked Bee-eater (not a passerine I know), my first Bluethroat of the season and that's it more or less.

Southern Grey Shrike (aucheri) - 1cy, quite an ID pitfall for pallidirostris, no? 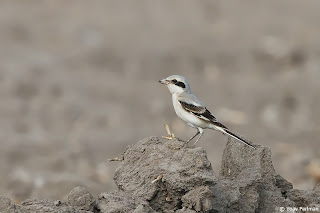 Then I joined the team and toured between the stations to say hi to all the team members. At noon I arrived west where I helped Gaidis from Latvia to count the first major passage of Lesser Spotted Eagle this season - we had about 1000 in the hour I was there. Quite nice for some moments. With the main stream of eagles a few small groups of levants, Red-footed Falcons, one Steppe Eagle etc. Lots of Short-toed Eagles flying high but some stooped down to hunt during migration like this beast: 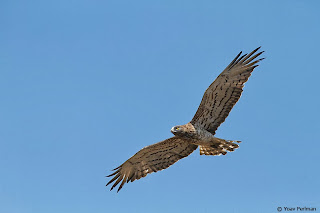 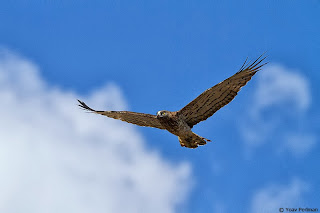