Last night I completed my annual monitoring project of Nubian Nightjars at Sdom saltmarsh, where their sole population still exists in Israel. I have been working with these fascinating nightbirds since 2003, but last night was simply fantastic - beyond all my expectations. I knew that Nubian Nightjars respond to moon cycle, and that on full moon nights their activity peaks, but I didn't expect such intensive activity.
I arrived rather late, at 21:30, and started working in turbo-speed, in order to cover all potential territories. I was done at 04:45, working non-stop minus one coffee break. When I did my totals I couldn't believe myself - I found breeding activity in 55 territories! This number is much higher than previous totals. For instance, in 2012 I found 28 active territories there. Last night was one of those nights that everything worked like magic. I found breeding activity in almost every potential territory I checked; the birds were hyper-active, with the males being super-vocal all night long. In some spots I could hear seven or eight different singing males simultaneously! In this recording, for example, you can hear three (and a Rufous Bush Robin - many started singing at 03:00).

This dramatic increase compared to last year represents both better monitoring by myself (I had the ability to reach some sites that were inaccessible to me last year); but more importantly I think it represents a true increase in population size, reflecting the regeneration of some degraded patches, and general rehabilitation of the population after some tough years. These results only emphasize the importance of the Sdom Saltmarsh for this endemic subspecies and as a last representation of this unique habitat in Israel. Bringing into account the worrying situation in Jordan, with evidence of accelerating habitat destruction for cultivation, the importance of Sdom Saltmarsh cannot be described as less than extreme.

Until 02:00 the nightjars didn't move much and stayed close to their territory cores, but later on they resumed foraging and I saw many pairs and recently-fledged juveniles.

Until about 02:00 Yosef and Oded joined me, but then they left ("When the sea gets rough, one can see only the tough" - in Hebrew it sounds much better...) and I continued working solo, so photography options were rather limited. Only this bird that sat on a tarmac road allowed me to photograph it. 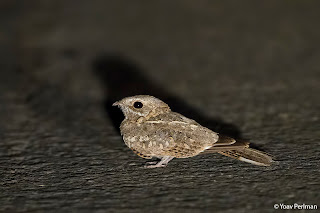 I recorded quite many individuals. One was particularly close, and from this short distance you can hear the peculiar, soft and low-pitched 'ku-ku-ku' notes - listen carefully:

Not too much other night life - 3-4 hares, 1 fox, some Wild Boar, some Stone Curlews, one Barn Owl and that's it.

Many thanks to Yosef, Oded and Moran for their help during this memorable night.
This ongoing project is supported by the SPNI and by the Hoopoe Foundation.
פורסם על ידי Yoav Perlman ב- 8:43 PM