Lesser Kestrel was listed as globally Vulnerable by BirdLife International, but has been recently downlisted to Least Concern as a result of positive trends over much of its range. A similar trend happened in Israel, when positive population trends were noted in the early 2000's and it was downlisted in Israel from Vulnerable to Threatened. Last time the population in Israel was properly monitored was in 2005.
This year I'm coordinating a national census of these delicate falcons. This project is funded by the Hoopoe Foundation. The falcons are almost finished breeding, and the results I have so far are quite alarming, with some sharp declines noted in the major populations in N and C Israel.
Today I revisited two colonies in the N Negev - they seem to be doing here relatively OK, with stable numbers compared to a decade ago. This may be the result of a good rainy winter, resulting in high insect and arthropod productivity well into late spring. Today the birds were feeding like crazy which made nest locating very easy. The chicks should fledge in a week or so. Then they disperse somewhere - first the adults and later on the juveniles. Nobody knows where they spend the months between leaving Israel by mid June and arriving in E Africe in late October. Satellite tags anyone? 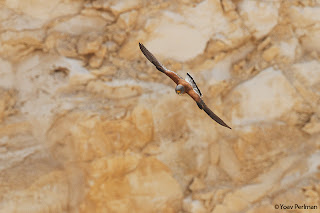 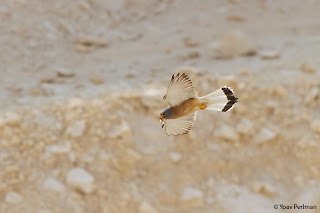 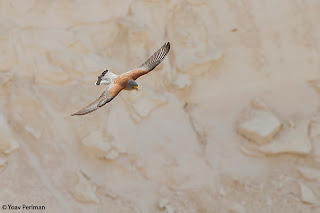