The Sooty Falcon is one of Israel's most fascinating and least-known breeding birds. Data on population size and trends was last collected in 1984 by Ron Frumkin, and since then some indications seemed rather negative. Meidad Goren, director of Ramat Hanegev Birding Center, organized a breeding survey in large parts of the Negev in 2011 and 2012. He carried out much of the fieldwork, together with Barak Granit, with the aid of NPA wardens and ecologists, and many other birders and volunteers. During the survey they visited some extremely remote parts of the Negev, and described previously unkown pairs from new regions. In addition they compared their data with the data obtained by Frumkin in 1984. Results were sobering in some areas, with low densities. In addition, these super-hunters are facing some serious risks in Israel and on their unknown wintering grounds in Africa.
Meidad and Barak will present their results in the annual Bird Day next monday, in the Tel Aviv University. I contributed the images below to their presentation.
Sooty Falcons breed very late, and time their breeding according to passerine migration - they feed on the wing mainly on active migrants, preferabely hirundines. In late September I helped Meidad with the fieldwork. We were fortunate enough to visit a breeding site in the high Negev Mt. We stayed away from the nest (we heard the chicks calling from inside the nest), but we positioned ourselves rather close to the preferred perch of the parents, across the gorge from the nest. Both adults met there every few minutes after a hunting tour, socialized, exchanged food, preened etc. The visits to the nest were very brief, and out of view from where we were sat. In total we were there for less than an hour, but what an hour it was!

Don't forget to get a martin on the way back home! Sooty Falcons - female (left) and male (right) 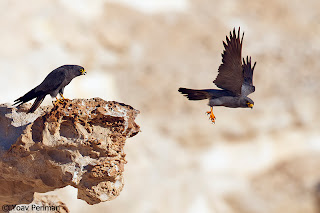 These falcons are possibly the ultimate aerial hunters. At one moment we heard calls of Sand Martins - a small flock passed overheard on migration, heading south. The male falcon heard them too. He looked up, shrugged, took off and out of sight, and after a minute or two returned with a martin in his talons - unbelievable! To maintain such ultimate hunting ability, they need to keep their feathers in perfect shape. So after each hunting attempt they both spent several minutes preening, regaining absolute aerodynamic structure. 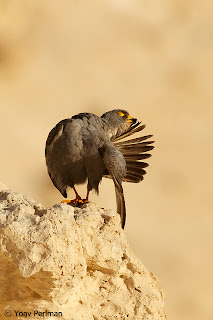 Here's the female - after preening and stretching - time to take off and get some more food! 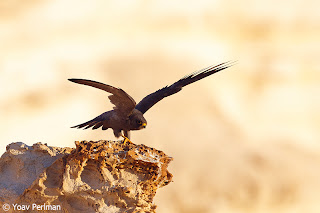 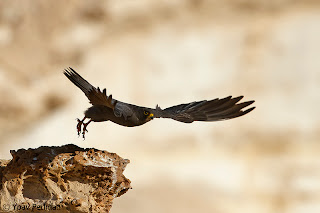 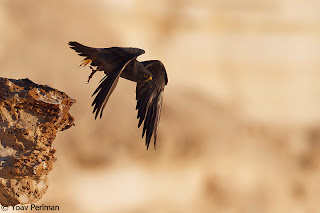 The falcons were quite indifferent to us, and flew over us several times, so fast and so close we could hear their wings cut through the air. I was never fast enough to capture these close passes. 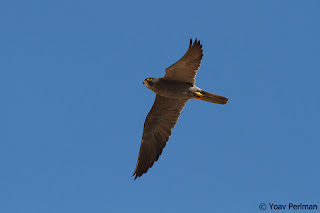 On our way out the female sat on a rock right by the trail. It refused to fly away, and just sat there, 10 m away from us, watched us and then started behaving in a manner I can only interpret as acting or showing off. She looked us straight in the eye, stretched, scratched, flapped, preened for about 20 minutes - it really felt like she was doing it especially for us. Amazing experience. 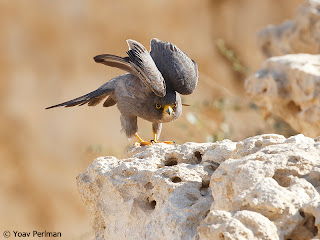 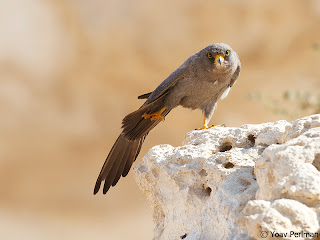 To conclude, this was one of the most amazing mornings I had with birds in my life. Many thanks to Meidad for this special opportunity. Thanks to Meidad and Barak's hard work, I hope that this valuable data will help us protect these beautiful birds better.