Went ringing at Ashdod this morning, my monthly CES visit. It was bloody cold, and thanks to a hole in my wellies I got very wet too. I had a larger catch than I expected. Good that I arrived early - at dawn good numbers of Bluethroats got caught, including a returning bird from 2011. Later on more Chiffhcaffs etc. Sexier species included Moustached Warbler, Penduline Tit and a lost Marsh Warbler - I had ringed it in October, don't think it's going to migrate this year - extreme wear on both wings. Interestingly, it hasn't started moulting yet, while at Ngulia this time of year they're already post-moulted. 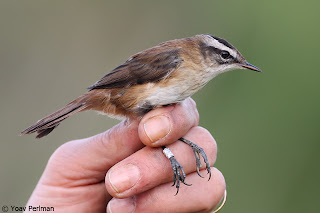 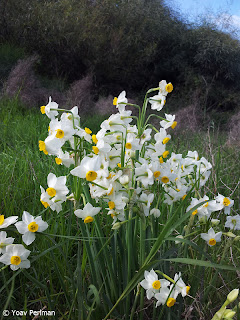 While taking a net down one Moustached Warbler was very curious and came to check me out, calling non-stop. Got my phone out and recorded it: