Yesterday I participated in the main public event of the ornithological year in Israel - the National Bird Day, that took place in tel Aviv University. This great event, taking place for the 33rd year, attracted about 1000 enthusiats from all over Israel. As in recent years, my main contribution to the event was the Amit Geffen photo contest exhibition. I have been organizing this contest, which has become Israel's main wildlife photo contest, since my dear friend Amit passed away in 2007 at the age of 21. Dubi Kalai received the first prize in the pro category for a beautiful image of a semirufus Black Redstart. Here's the exhibition just before the masses arrived, early in the morning: 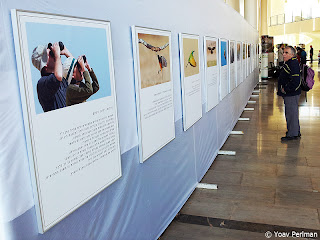 A special guest was IDF's chief of staff, major-general Benny Gantz. Here he's admiring my exhibition, together with the two main figures of Israeli birding, Dan Alon and Yossi Leshem: 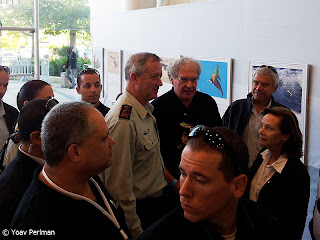 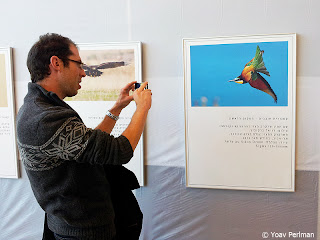 One of the days' highlights was the screening of a movie on Hadoram Shirihai, produced by Yuval Dax and Amir Balaban. It's in Hebrew, but the images are universal.