To continue the dead animal theme, I left early this morning towards Ashkelon for some seawatching. Near my house I found a road-killed Badger - it's the second badger I found at this exact spot during the 6 months I've been living here. 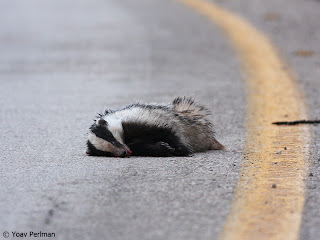 At Ashkelon I met up with Re'a. The wind was very streong but completely wrong (SE), so we had rather low expectations. In fact the first two  hours were not too bad with good gull action, 1 Cory's Shearwater (dunno which one) and 1 Gannet. The gulls included 8-9 Pallas's Gulls, most of the adults with complete black hoods - must be the best large gull in the world. In addition we had a good selection of large gulls that included siberain, steppe, caspian, yellow-legged, baltic and armenian. Best regards to the IGM participants at Zagreb!
However the most bizzare and exciting bird of the morning was a White-tailed Lapwing! We suddenly found it flying south very close, just above the shoreline; it continued south and then disappeared east above the city... It was too fast so I screwed the record shots up and got nothing. Nevertheless it's a good record - both for the region and for the season (very few winter records in Israel).
A Yellow Wagtail flying north reminded us that spring migration is just around the corner.
פורסם על ידי Yoav Perlman ב- 7:15 PM