I am the walrus, goo goo g'joob

IThis morning I went solo-seawathing at Ashkelon again. Yesterday's strom had slowed down a bit, but the wind was still strong, the sea high, and there was lots of rain. Great fun.
Always when I go to Ashkelon I face the same trade-off - do a solo seawatch at Ashkelon and save two hours of extra driving through heavy traffic, or rather drive all the way to Jaffa, and join the others? This morning I chose Ashkelon.
There were lots of gulls and terns throughout the morning but quality birds were rather few and far between. Only 45 km north, Barak and Shachar had a great morning with 18 Leach's Petrels. I received only two of these, though I had reasonable views of both. A beautiful adult Med Gull with complete black hood was very nice though.
Morning totals:
Leach's Petrel 2
Sooty Shearwater 2
Cory's Shearwater 1
Mediterranean Gull 1
Mediterranean Gull - ad. summer! 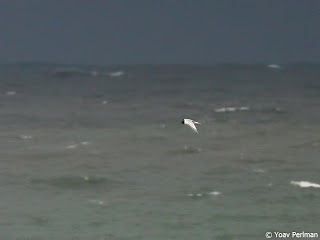 I was not the only human on the beach. Apparently some people are even more masochistic than seawatchers. Thank me for not sharing with you images of this looker walking out of the water.
Mediterranean Walrus 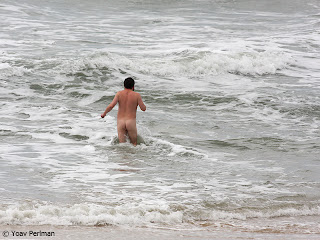