Yesterday I met up with Rune Palmqvist and we had an enjoyable day of birding together. Just after we met, north of Beer Sheva, we had two Eastern Imperial Eagles sat right next to the road. Though it was not raining anymore the weather was still pretty bad - cold, windy and dark. Like a nice Danish summer day.
We headed south to Nizzana. We arrived at the sandgrouse ponds too late for the sandgrouse, but had a nice Barbary Falcon and this cracking male Pallid Harrier (every time when I post photos of Pallid Harriers I call them 'cracking', but that's just what they are, aren't they?):
Cracking Pallid Harrier 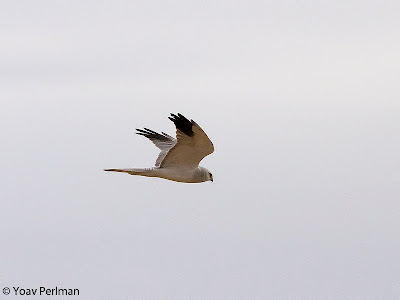 Further south we had pretty good numbers of MacQueen's Bustards - seves birds within a few minutes of searching. All were males - it seems that the males have returned from their non-breeding grounds. No dancing seen yet.
MacQueen's Bustard 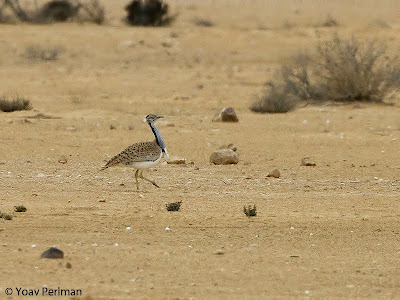 Apart for the bustards we had a nice couple of Cream-coloured Coursers and not too much else. Weather was not best for passerines.
In the afternoon we checked Lahav reserve, and had one Long-billed Pipit, three Finsch's Wheatears and a Spectacled Warbler.
פורסם על ידי Yoav Perlman ב- 7:59 AM