Today I participated in the National Waterbird Census, conducted more or less globally simultaneously. Weather was very bad today - very cold and windy (rain tsarted only later) so birding was not too much fun. I checked several reservoirs in the southern Coastal Plains.
Waterfowl appeared in relatively low numbers, with nothing out of the ordinary. Slight interest came from 5 Great Crested Grebe at Zohar reservoir - a regular wintering site for them. It was encouraging though to see two Eastern Imperial Eagles nearby, after three birds got electrocuted in this area during the past two weeks. 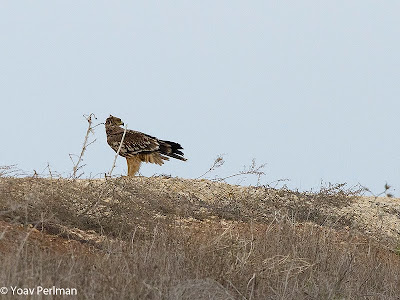