After the previous nights' storm, Yesterday I went to Jaffa for a couple of hours with my half-Israeli friend Gert Ottens for some seawatching. We were hoping for some good activity, but when we arrived the wind slowed down seriously and even swinged to the east, so it was very quiet. Just as I was about to say again how boring it is and how seawatching in the Mediterranean sucks and how wonderful it was in the past I glimpsed a strom-petrel sp.! I found it too late, just as it was getting out of sight in the south, rather close, and I lost it immediately after that initial view. I managed to see it had a white rump but that's all, couldn't say anything about size, shape, flight action etc. Damn. After that our expectations rose and we wasted another hour or so but it was really dead, and then the rain returned hard and we escaped into the car. Other birds during the morning were one Gannet, one Arctic Skua and this 2cy Med Gull that showed really well the whole morning.
Mediterranean Gull - 2cy 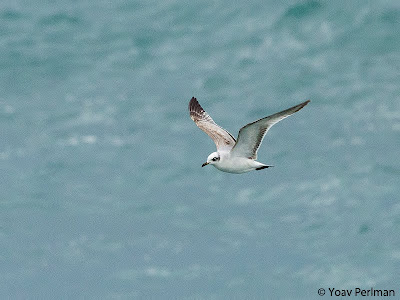