After a pretty slow beginning to the autumn, things have really picked up lately. I've done too much long-distance twitching in the last two weeks (bluetail Eilat, hypocolius at Eilat again, swans at Hula), and this morning news broke of a Taiga Bean Goose found at Kfar Baruch in the Jizre'el Valley by Tuvia Kahn. Good one Tuvia! This is the second for Israel, but the first of the race fabalis. The first was at Eilat in March 2007, and was enjoyed by the guests of the first Eilat Bird Festival - the bird spent most of its time on the adjacent soccer field, about 200 m from the hotel where we were staying. It was closer to rossicus, though it was a difficult bird to ID (see below). Unfortunately I will not be able to try for this bird before Tuesday, hope it sticks around. But what next?
Tundra Bean Goose - March 2007 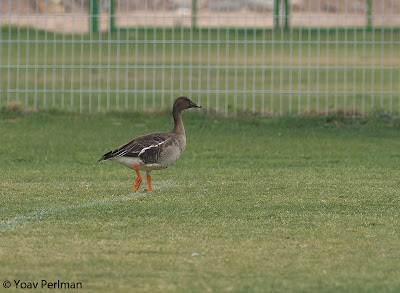