Wow, Africa is amazing. So many colours, sounds and smells.
After a long journey through Addis Ababa we arrived at Ngulia last night. A Leopard along the way near Mtito gate was quite surprising. The last part of our journey through Tsavo West was after dusk, and we had about 30 nightjars of four species.
Night ringing never actually happened as mist didn't form. There was some rain at night but not enough to knock all of those birds down. Morning catch was rather slow but for my team it was pretty good as we all had the chance to get used to the birds, to adjust to the system and to meet the terrific team. There were no Palaearctic dramas but all the predicted goodies showed in small numbers - Iranias, Basra Reed Warblers, Isabelline Shrikes etc.
White-throated Robin (Irania) 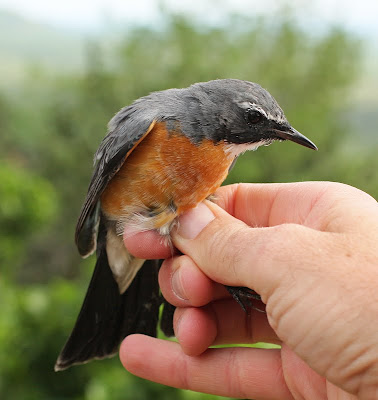 Some nice afrotrops included a stunning Somali Golden-breasted Bunting and a Lesser honeyguide.
An introductory afternoon safari drive to the Rhino sanctuary was fun. We saw most common species expected in this habitat, and I enjoyed Black-faced Sandgrouse, Crested Bustard and Secretarybird.
Yellow-necked Spurfowl 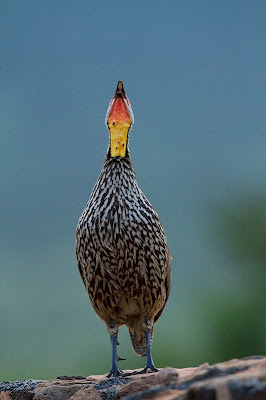 Unfortunately, internet connection here is awful (Scopus, thanks!) so it is almost impossible to upload images. I promise to get these images up as soon as possible.
Colin Jackson has a blog of his own in which he gives daily Ngulia updates - check it out:
http://www.arochakenya.wildlifedirect.org/
פורסם על ידי Yoav Perlman ב- 7:00 PM