Spent today birding with my good friend Gert Ottens. We started off early and headed to Ein Gedi field school where a Kurdish Wheatear has been showing on and off for the last couple of weeks. Today was its day off. We met Gal Shon there, and together we searched the field school and its vicinity for a couple of hours but found nothing. The only semi-interesting bird we had among the commoner desert species was a female Blue Rock Thrush.

Little Green Bee-eater - so much more beautiful than a bloody wheatear! 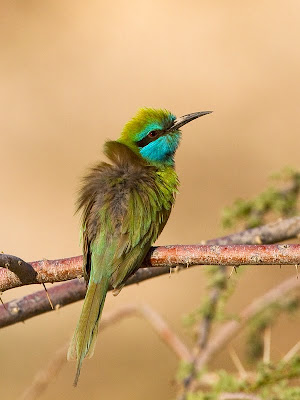 Seawatching over the Dead Sea produced zero Fea's Petrels.
The rest of the morning was spent at Wadi Mishmar that held four large flock of Lesser Israeli Hikers but very few birds; some noisy Trumpeter Finches were the only reason for joy.
Then we decided to try our luck with Buff-bellied Pipits near Kalya, where we found two unringed birds (Ron ringed one there last month). They kept their distance from us so no images but we had good scope views.
A quick look at Tsor'a on the way to ship Gert back to his wife by train produced one Quail.
פורסם על ידי Yoav Perlman ב- 7:33 PM