Yesterdsay I visited another Nizzana atlas box. Bird numbers dropped considerabely compared to March and early April - it is already very hot, and many breeders have already disappeared, God knows where. Has anyone got an idea where are all the Spectacled Warblers and Desert Wheatears that fledged just a couple of weeks ago disappeared to? They have evaporated completely, and are not anywhere to be found in Israel at the moment.
Still had some good birds, including a few MacQueen's Bustards, CCC's, two Lesser Short-toed Larks and several flyover Hill Sparrows.

In recent visits I have seen many mammals and reptiles. I suppose that the rising minimum temperatures results in better mammal activity. I had good observations of canines - Wolf, Golden Jackal and Red Fox - yesterday I found these three curious cubs outside of their den. 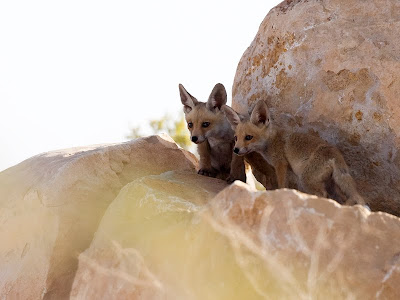 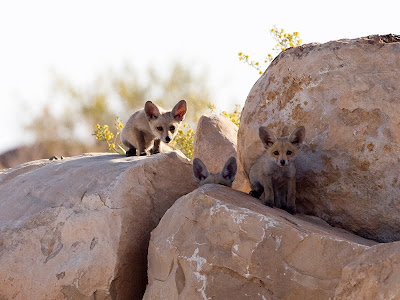 Dorcas Gazelles are seen in good numbers, and I had a few Wild Ass a few days ago. Cape Hares are pretty common too. Yesterday on the way back found a road-killed Desert Monitor of moderate size (about 70 cm long) - so sad to find such a rare and beautiful animal dead. I hope to get images of it soon.

In the evening I went to Neot Hakikar for nightjar monitoring. Driving down there was a dramatic weather change, with a cold front entering quickly. This knocked down many thousands of migrating Common Swifts, that on normal weather must migrate too high up for us mortals to notice. Along the road east of Dimona, thousands of birds were feeding low over the road, some stupid birds even getting themselves killed by passing vehicles. But the view was quite amazing.
פורסם על ידי Yoav Perlman ב- 9:31 AM