Guys, don't worry, this isn't becoming one of those terrible Scandinavian gull ID site. But, what can I do, this is pretty much all that winter-birding at Ashdod has to offer. And, yes, I have a fetish for gulls too...
Anyway, about 400 large gulls this morning, out of them 100 adults. Mainly heuglini, smaller numbers of cachinnans and fuscus, with small numbers of intermedius, armenicus and barabensis.

This must be one of those N Norway intermedius - 3cy. Note the cachinnans in the background: 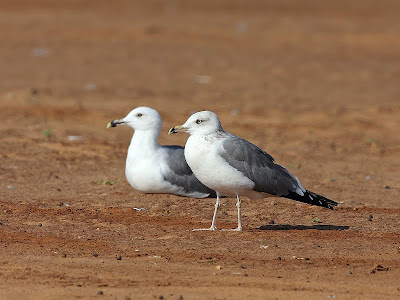 This Finnish-ringed fuscus is one of our oldest and most observed birds ever at Ashdod. Hatched in 1998, it was first seen in Israel in December 1999, and was seen almost every winter since (thanks Ehud for the info): 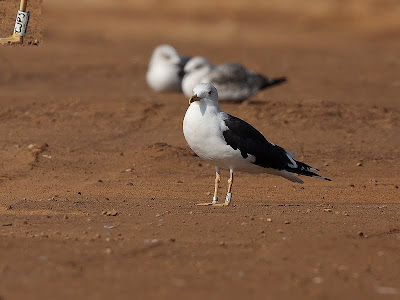 I watched the gulls bahvior for a while. I really tried to understand these stupid birds fighting with each other constantly over feathers, pieces of paper, plastic pipes etc., but I have no idea what goes through their tiny brains. Most birds engaged in this behavior were 1cy's, but also some adults fooled around a bit. Look at this heuglini (note P9 & P10 are unmoulted): 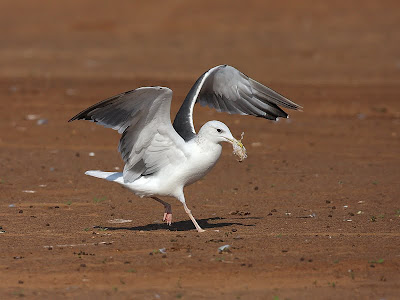 This is a 1cy heuglini getting very excited and proud of himself with a fantastic piece of paper: 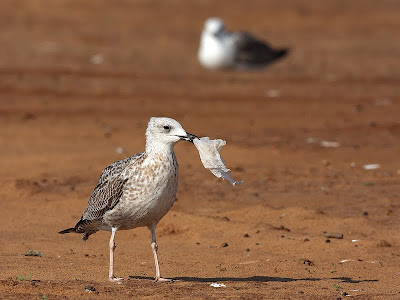 This is how part of the gull flock looks like:

This 2cy Greater Spotted Eagle flying over spooked the whole flock (Ehud hates those eagles), and they took off and headed towards the beach I guess. 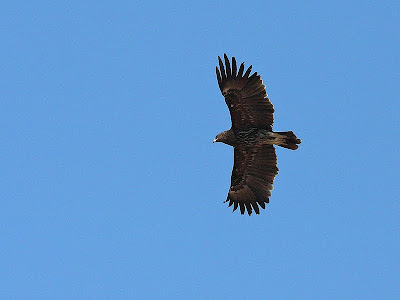