Fast forward from yesterday's somewhat morbid post, happy ending after all. This early morning, before a conveniently pre-scheduled meeting in Kfar Ruppin at 07:00, Dan, Avner, Bamba and I had a chance to connect with the White-rumped Vulture, relocated yesterday by Tuvia and seen to go down to roost near Sde Eliyahu. We were a few minutes away when the news came in, that it's already on the compost heaps near Sde Eliyahu. The best observation point on the heaps is from the raised bank of the very same reservoir where the first Wilson's Phalarope for Israel was found in December 2020... We joined a large crowd already assembled, to see the petite vulture sat on a compost heap among hundreds of storks and kites, looking a bit like a Turkey, perfectly lit by the soft early morning light. Here's an uncropped image giving an idea of the setting: 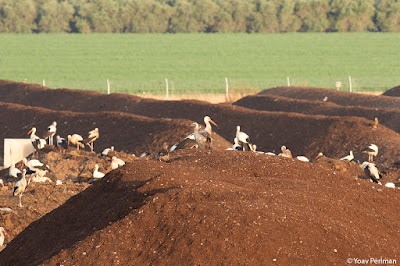 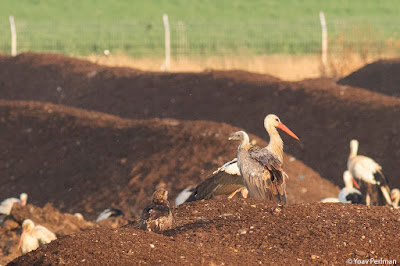 We had little time before the meeting, just enough for taking a couple of video clips through my Swarovski ATX85 scope using a Swarovski phone adapter:

I was doing a quick live Facebook stream, when a bulldozer went into the compound to work and flushed the vulture and storks - check the commotion from 02:20 onward:

The vulture then flew across the valley, displaying its wonderful whitish underwing coverts: 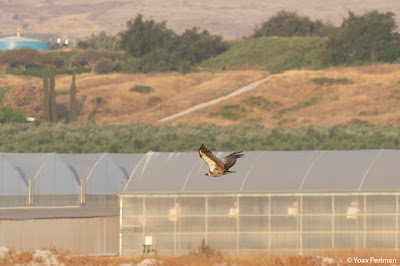 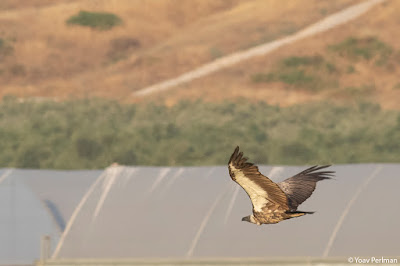 Those dark carpal coverts are very prominent - I think this is another diagnostic feature of White-backed Vulture not mentioned in literature: 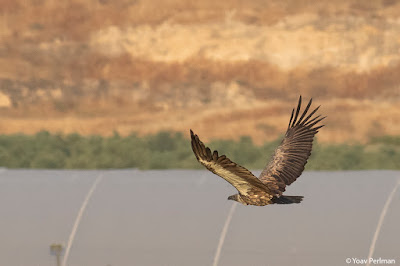 Exposing its white back too: 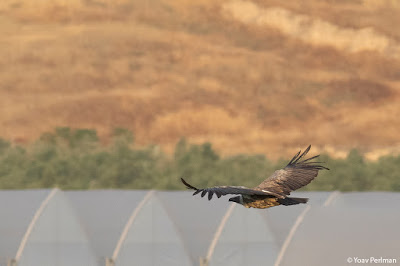 It landed on a prominent Jujube tree, where it remained until we had to leave for the meeting: 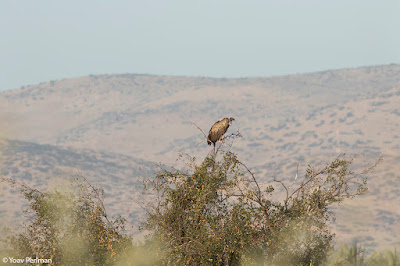 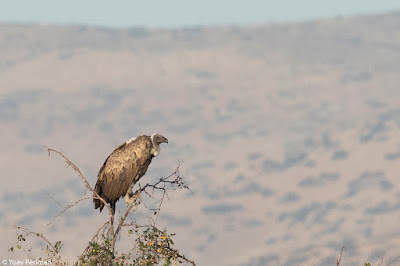 What an amazing bird, another astonishing first for Israel, hot on the heels of the Chinese Pond-Heron. Well done to the initial finder Asaf Mizrahi, INPA ranger who first spotted it on April 29th in the Judean Desert. It must have been on the move then, heading north. Incredibly, it was relocated in the Bet Shean Valley yesterday by Tuvia Kahn, about 70 km north, and thankfully remained until today. According to other birders, it departed north in late morning, and unbelievably was relocated again in the late afternoon, going down to roost near Amiad, north of Lake Kinneret, another 50 km north, by Yoni Vortman. 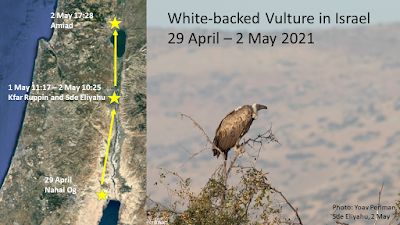 Where next? The predicted flight trajectory into Lebanon or Syria is very risky - hope it survives. Not that its global conservation status is great (CR).
I have a bit of history with White-backed Vulture. While doing my PhD fieldwork in Extremadura, Spain in May 2017, I found a funny vulture that later I identified (with the aid of Dick Forsman) as White-backed Vulture. Check the ID features in this post - most are visible on the Israel bird too.
A couple of words about twitching with my boss, Dan Alon. I don't take it lightly. Dan, director of BirdLife Israel, is not an active twitcher himself. Yet, I manage to drag him out for a good twitch every now and then. Today it all fit perfectly with our meeting in Kfar Ruppin, to develop our wetland restoration projects there. This is not the first 'first' I take Dan to twitch - we went together for the Barnacle Goose back in November 2018. BTW, I think Dan is the only person in Israel who saw both recent rare vultures - Lappet-faced Vulture (in Yotvata last week) and White-backed Vulture (today).
פורסם על ידי Yoav Perlman ב- 8:00 PM