Back from the ashes: African White-backed Vulture in Extremadura, Spain 17/5/17

17/5/17 was one of my last days of PhD fieldwork in Spain. We worked north-east of Trujillo in Extremadura. My route of point-counts and transects in agro-steppe habitat was about 3 km east of the small village of Torecillas de la Tiesa. Shortly after 07:00 I walked towards a group of vultures sat on the ground, clearly attracted by a carcass. From a distance I could see that the group contained Eurasian Griffons and several Cinereous Vultures too. Then I noticed a very small and extremely pale vulture, and alarm bells went off inside my head. I was still quite distant from the vultures, but I took some record shots, and quickly sent them off to a couple of local birders. This is a screenshot of a Whatsapp conversation: 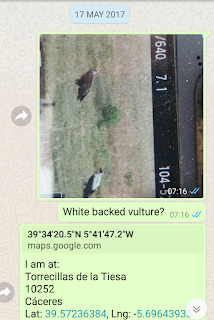 I then approached the vultures very slowly, improving my photos as I got closer. It was still rather chilly, early in the morning, and the vultures were not keen to take off and give up their breakfast. I got some pretty good photos of the bird. It eventually took off but only to land about 100m away. I was getting really excited about this bird. I googled some photos on my phone and it looked alright! Then my Spanish friends got back to me, after studying more back-of-camera photos I had sent them, and said it was probably just a heavily-bleached and miserable Eurasian Griffon. I had trouble to accept that verdict, but I had little more time to spend on this bird (I had other birds to count) and walked away leaving the vultures there around the carcass. I posted this bird in my blog, half-hoping someone would pick it up from there. But that never happened, and then it was back to the UK and to my university & family duties. I let go of this bird and forgot all about it. Because of storage space shortage, on the evening of the find I deleted most of the photos I took of the vulture, and kept only five originals (luckily).

Fast forward to a few days ago. I looked for something in Dick Forsman's recent Raptor ID book. As I browsed through the book, I came across the African White-backed Vulture (AWBV) plates, and suddenly I had this 'bingo!' moment. Everything I could see seemed to fit with my bird. I did some homework, read as much as I can about this relatively under-described vulture. I organised my thoughts into words, and sent my photos with an explanation why I think it's AWBV to several vulture experts, including Dick Forsman and a few Spanish friends. Dick replied back quickly, confirming it's AWBV, elaborating even more on what I had written him. The Spanish experts were less confident, and some repeated the opinion given to me in the field in May 2017, that it's an extremely small, bleached and unhealthy Eurasian Griffon (EG). However, confirmation I received from two top Spanish birders that I respect very much gave me enough confidence to move forward with this identification.

Here are the features that support the identification as AWBV: 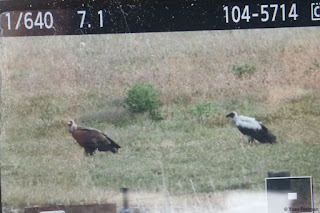 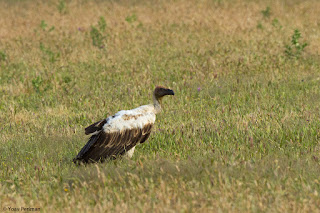 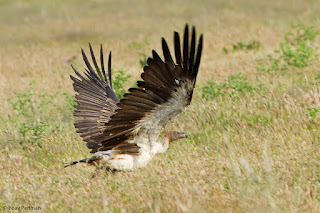 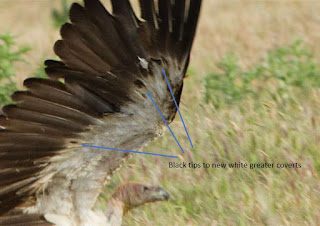 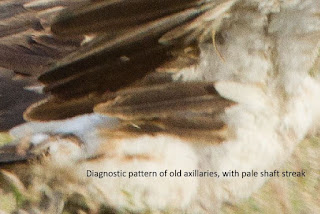 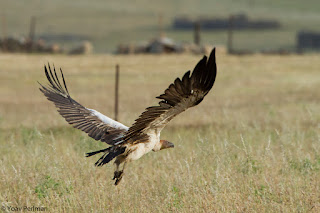 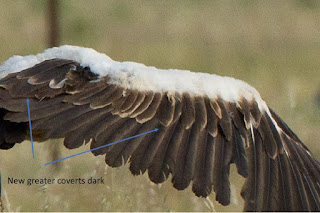 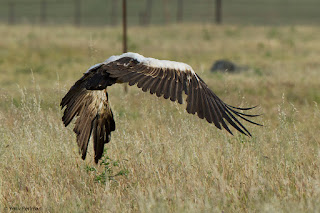 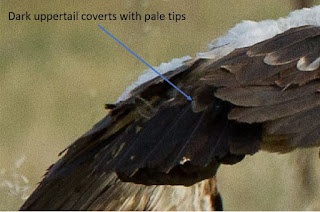 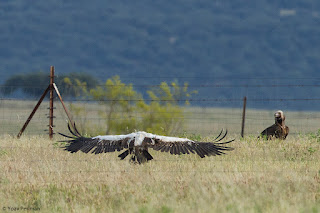 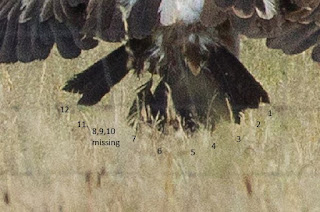 Sadly, African White-backed Vulture is Critically Endangered, like many other vultures in Africa and Asia. It is a mega rarity in the Western Palearctic. If accepted by the Spanish rarities committee, this would be the 5th Spanish record. All previous four records were near Straits of Gibraltar, between 2008 and 2016. There are two records in Portugal: 2006 and 2014; the 2014 record is still under review but looks pretty good IMO. There are two more WP records, both in Morocco, 2014 and 2017 (after my record 😎). This is potentially also the first record for Extremadura. Most of these details are from Guillermo Rodríguez and Javier Elloriaga's excellent article: Identification of Rüppell's Vulture and White-backed Vulture and vagrancy in the WP (2016) Dutch Birding 38: 349-375. Thanks also to Pedro Ramalho and Pedro Nicolau for the information about Portuguese records.

Personally, I am happy with this identification as AWBV, but must add some necessary reservations. From a rarities committee point of view, this might be a somewhat complicated decision, because of the 'apparently abnormal' appearence. It does give a 'sick' impression with all those missing plumage feathers, but perhaps this is normal moult for AWBV? While DF wrote to me that it is normal, I hope that Spanish RC manages to find support for this; also for the very advanced secondary moult. The open wing photos don't give an impression of a narrow and pointed wing shape as should be in AWBV. However, I think that it's hard to say anything about wing shape in these photos. Also, this bird might be in the upper size limit of AWBV. It is photographically size-comparable with only one EG, so hard to say exactly. I can only say that in the field I was struck by how tiny it was.

I am grateful to Dick Forsman for his quick and super-professional help with this case, as always. I also hugely appreciate the opinions and expertise of several Spanish friends whom I sent the photos and information to. Those who agree this is AWBV and those who don't are all top birders and vulture experts,  and I respect their opinions. Some of them are RC members, so I will not mention their names here, to allow them free judgement of the record when it gets circulated in their committees.

I regret that nobody else saw this bird. Several local birders could have seen it - I am sure it stayed in that area for a while, as long as the carcass was still attractive. But because I was talked away from my initial identification as AWBV, this bird went off the radar quickly and nobody followed it up. I should have done my research earlier, but I didn't, which is a pity. Who knows, maybe it's still hanging around with other vultures somewhere in Extremadura? Time will tell.
פורסם על ידי Yoav Perlman ב- 10:59 AM