On April 12th, Daniel Katz, posted a photo on a Facebook birding group, asking for help to identify a heron in a small pond in Jerusalem Botanical Gardens: 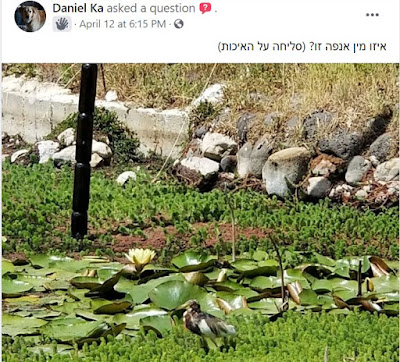 It was only the next day (yesterday, April 13th) that the photo received some attention. This was an awkward Squacco Heron-type bird, but I wasn't certain it was just a bad phone photo. In any case, I asked a couple of local birders to check it out. In the late afternoon, Shachar Hizkiya followed my advice, and checked that pond. He found there a certain heron, sent me a screenshot, and the rest is history: 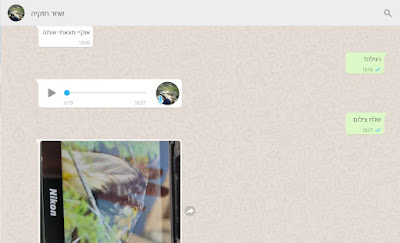 Chinese Pond-Heron. First for Israel, one of very few WP records. What a monster, in a tiny urban pond in the middle of Jerusalem.

I live about 40 minutes away from Jerusalem (without traffic). It's 18:07. The sun was already very low. Without hesitation, I grabbed my bins and camera and ran to the car, leaving my astonished family deserted behind. As I approached the city, in worsening traffic, I saw the sun lowering and lowering. I got to the pond in the botanical gardens just after sunset, only to understand that the bird had flown off, probably to roost, three minutes before I arrived. No further sign, despite a few of us searching potential roost trees in the vicinity. What a blow. Only Shachar managed to see it, no other twitchers did. I drove home in silence, also because it was Memorial Day here. 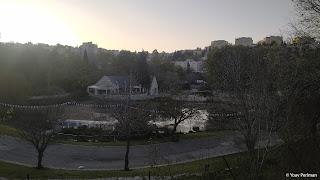 After a short and tense night sleep, this morning I was back up in Jerusalem at dawn, Piki in my car. This time, three minutes before arriving a sweet message landed in my phone - the heron just flew in. Few minutes later we were watching the heron. Chinese Pond-Heron on my list. Phew. At first it was feeding out in the open on floating aquatic vegetation: 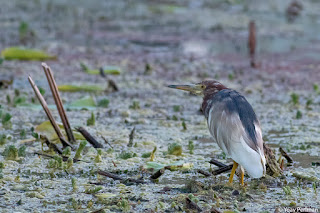 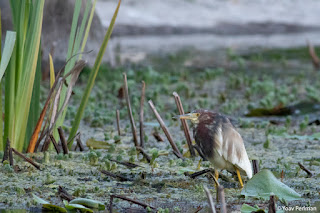 Shame the sun wasn't up yet, as the photos are crap and don't do justice to its true, rather glorious plumage tones. Fairly soon it flew into a tree where it spent the rest of the hour I could spend there. A growing crowd gathered, time to go. I had to leave early for an important meeting, before rush hour. At 07:45 I was back home, heart still pounding fast.