Back in December, in the midst of the Yank Attack, a Lesser Yellowlegs was found in Ein Hamifratz fishponds, north of Haifa, by Daniel Melamed. It was hardly available, just early next day, but I couldn't go, and then it was lost. I was hoping it would be refound somewhere, but it didn't. Until Saturday, when Yaron Baser brought it back from the ashes, about 15 km south, just north of Haifa, in Kfar Hamaccabi WTP. On Saturday I was hiking with my family, and couldn't go. Yesterday I worked in the Judean Desert, and couldn't go. I had to hold my breath, risky... until this morning. I was up there before 07:00 with Piki, Jonathan and Arad, and the bird showed quite quickly. At first it was in a horrible-looking, plastic-lined sewage pond, showing through a fence, into the sun. Less than ideal conditions but OK views, and a great bird to see. Later on, 'normal' people went into the sewage compound to work, and the bird moved to a nicer-looking reservoir, closer, with nice background. Great view, fantastic bird. 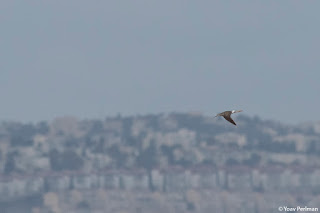 Haifa skyline in the background 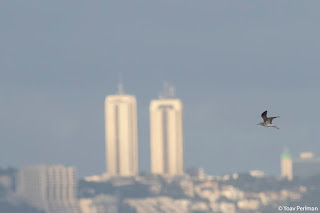 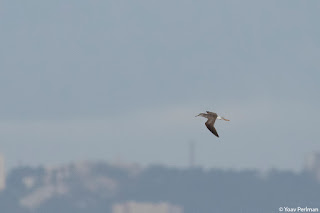 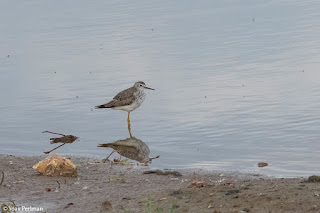 Nice to hear it call

This is the 3rd record for Israel. I did see the second for Israel, back in September 2009 in the Bet She'an Valley, just before I started up this blog. So it was good to reconnect with such a quality bird.

Congrats again to Daniel who found the bird originally, and to Yaron who refound it.