I barely recovered from the trip down to Eilat for the American Goldy, when news broke yesterday of another monster yank in Israel, this time a Wilson's Phalarope at Sde Eliyahu in the Bet Shean Valley, the first record for Israel! Chen Rozen found it - well done to Chen, it's not the first first under his belt. Timing was very problematic yesterday, so I decided not to go straight away because I'd reach there just around dusk. In any case, half an hour before dark the bird was seen flying off high and far to the north...

It was a short sleepless night, and I met up with Amir very early. We drove in the dark to arrive at Sde Eliyahu for dawn. To our disappointment, when it became light enough to identify birds, we discovered the phalarope was not present. There were tons of other birds, including a roost of 1000 Pygmy Cormorants, Pallas's Gulls, thousands of kites, storks, herons, pelicans and all the goods Bet She'an Valley has to offer (eBird checklist here). But that wasn't enough to compensate for the looming dip. I frantically checked several other reservoirs nearby, hoping to relocate it, as did others. No sign. We decided to head back to the original location, hoping it would return at some point. Nothing. We were drinking consolation coffee before the drive back, already reciting the familiar dip phrases of 'it's part of the game', 'maybe there will be another chance', 'lucky I don't need it for my WP list'. Halfway through the cuppa, suddenly the phalarope reappeared right underneath where we were standing on the tall bank. Boom! Coffee cups tossed aside, scopes and cameras back into action. I managed a few quick snaps and a short video before it took off, to our relief it just landed in the center of the muddy reservoir a short disance away. 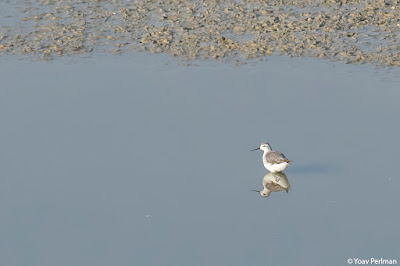 What a relief! And what a fantastic bird. Indeed, I have seen one before in the WP - heading back from the Acadian Flycatcher twitch at Dungeness we caught up with one at RSPB Vange Marshes. 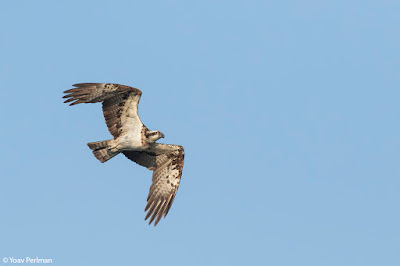 I got back home before noon, and had a good siesta. When I switched on my phone, I found an email from Daniel Melamed, asking for confirmation of a Lesser Yellowlegs - insane! This yank attack is totally unprecedented here in yank-less Israel.