This morning I had a meeting in Eilat, which is always a good excuse for birding down there. I left home before my elder son went to sleep, and arrived at Yotvata at 04:30. I checked the fields and had two Egyptian Nightjars and a Pharaoh Eagle Owl. I was alone, driving and holding the torch, so failed with photography. I snoozed for 15 minutes before there was just about enough light for birding. The sky was full of pipits and wagtails, and many hirundines and swifts were on the move. There were first splashes of spring - always elating, offering some hope in this screwed-up world. Wabi-sabi style. 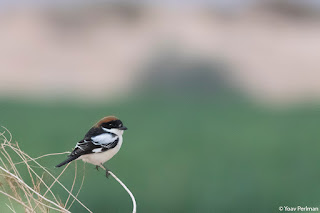 eBird checklist here.
Then I continued to Nimra Valley, near Timna. Itai found there a male Menetries's Warbler a few days ago, which I was hoping to connect with - only a few annually in Israel. I met up there with Amit, an excellent young birder, and his dad Guy. We started searching for it, and I was surprised to find a female Menetries's at almost the same spot - very cool. My first views were through the scope - at first it was feeding out in the open. Not a top video but gives the idea:

When Amit and Guy joined me it became a real nightmare and was difficult to observe. We worked carefully and slowly, and bit by bit we managed to see it well enough to confirm ID. Impressively,  Amit managed sharp flight shots as it moved from bush to bush. Thanks for allowing me to share the illustrative photos here (check those tertials!). Later on they saw the male too. 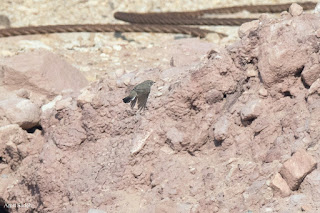 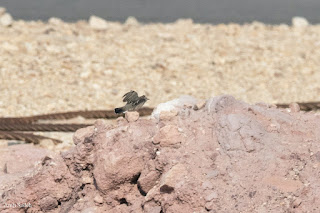 Some nice desert birds and migrants there, including a couple of Rueppell's, Hooded Wheatear, Temminck's Lark and Striolated Buntings. eBird checklist here. 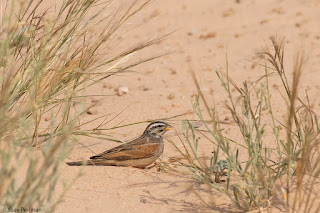 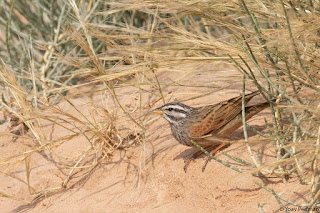 Conveniently, my meeting was at IBRCE, so I had time for a quick walk with Noam. It felt pretty active, birds were on the move. There was a steady trickle of Steppe Eagles, an Oriental Honey Buzzard, Long-eared Owl in roost - quite enjoyable really. 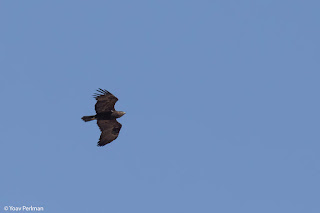