Returned last night from five days in Spain, the fourth installment of our 'Big Cat Quest' (after Tiger, Lion-Cheetah-Leopard, Jaguar). While Iberian Lynx is at most an honorary Big Cat, it still is rare, beautiful and attractive, hence our interest. The team stayed the same - Amir, Eli, my brother Gidon and myself. We teamed up with Simon / Inglorious Bustards and stayed up in Los Piños, on the edge of Parque Naturel de la Sierre de Andujar.
On the way south we first stopped for a look at Laguna de Navaseca, about halfway between Madrid and Andujar - ideal birding stop with lots of birds, including many White-headed Ducks already getting into business: 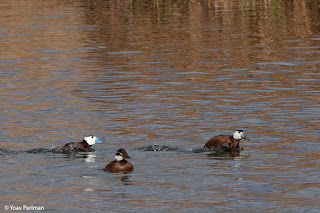 Then it was up to the impressive Parque Natural de la Sierra de Andujar. We had planned to dedicate three full days and another morning for Lynx. Because of foul weather and various other limitations we spent much less time up on the mountain.

When the sun did come out, we enjoyed spectacular Andujar scenery. 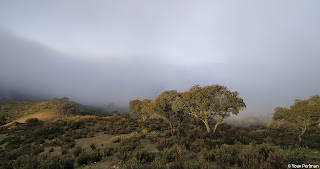 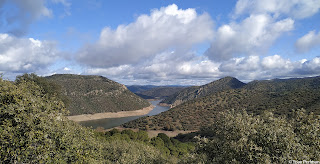 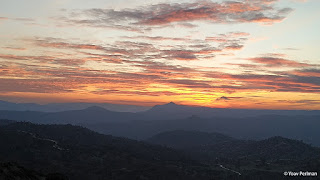 When planning the trip I got the impression that Lynx was almost guaranteed with the amount of time we had planned to spend. In practice, we had to work very hard to get just a glimpse of this phantom cat. We spent most of our time at La Lancha, that seems to be the place for Lynx nowadays. On our final afternoon, in fading light, news came through of a male that was spotted down the road. We sped there, joining a rather large crowd assembled there.

After a nerve-wrecking wait the large macho was finally spotted patrolling his territory slowly, thanks to a mischief of mobbing magpies. He was distant, and my camera didn't cope well with the harsh conditions. Check this abstract illustration called 'Lynx walking majestically by a bush'. 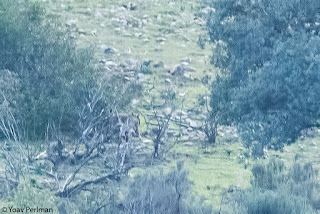 Amir, however, managed to obtain some decent footage:

Adrenalin levels were high, and we were pretty chuffed. However, sadly, not all of our team managed to connect with the cat, and viewing conditions for those who saw it were far from ideal. We left the mountain with a slightly bitter taste, and hunger for another visit. 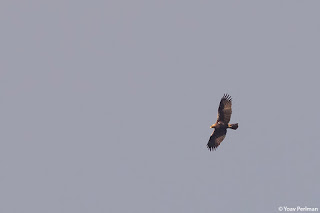 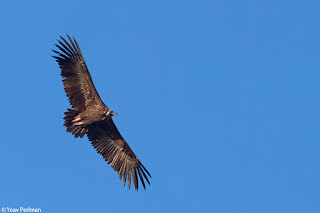 Supporting mammalian cast was Spanish ibex near the dam, including these two playful young males:

We broke the long journey back to Madrid and home in some familiar agro-steppe habitat south of Tembleque (thanks Remco!). We found there large flocks of Great Bustards, Little Bustards, Calandra Larks and other birds sheltering from the horrendous weather. 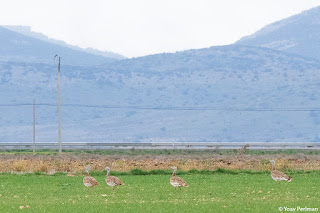 As always, big, wet bessos to the team for yet another great trip. Harder work this time, but fun nevertheless. Thanks to Simon and Niki for support before and during the trip.
פורסם על ידי Yoav Perlman ב- 9:05 PM