This morning I birded with Jonathan at Hatzuk, north of Tel Aviv. Overall migrant numbers were not huge, yet it was an enjoyable session. Most interesting was this striking Phylloscopus. When we saw it first, we thought it was a Siberian Chiffchaff, because of its dark bill and legs, and overall 'cute' look. I was slightly concerned by the lack of any greenish tinge to secondaries and tail, but agreed that it was a chiff. When I checked images later on, I figured out it was a Willow Warbler, based on the long primary projection and lack of emargination on P6. Legs are rather on the dark side, but I guess they are indeed brown rather than black. Furthermore, I suggest it was in fact an apparent yakutensis, and not acredula, because of the complete lack of yellowish tinges to underparts, and some diffuse mottling on ear coverts and breast. Those were the initial views - very frosty-looking: 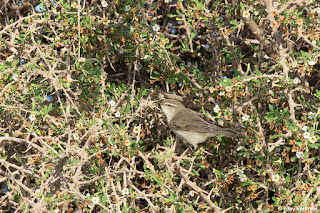 Check long primary projection and lack of any yellowish or greenish tinge, including undertail coverts: 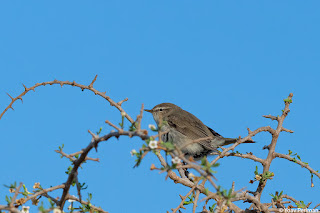 Bloody camera wouldn't focus at he moment of truth, sorry: 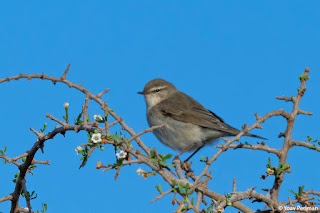 Blow-up of wing formula - lack of emargination on P6 clinches the ID as Willow Warbler: 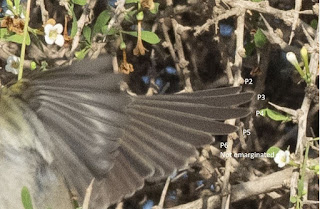 I have posted here a few yakutensis candidates in the past - see here and here. I find them sexy as hell, certainly worth looking for in Western Europe. yakutensis is one of those under-studied taxa. A recent study by Sokolovskis et al. (2019) of Lund University showed that there are some phenotypic differences between yakutensis and European taxa, but large variation in phenotypes makes these of little use in the field. Furthermore, genetic information did not show differences either. Yet the authors suggest to keep three subspecies as valid, based on different migration strategies shown by stable isotopes. Interesting stuff!
There is little field experience with yakutensis away from breeding grounds - Israel in October is certainly a good place to explore this mystery! 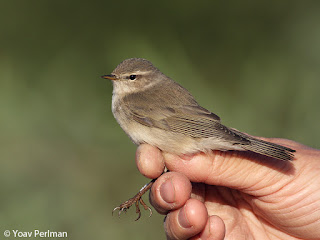 Other quality birds included a very mobile Desert Wheatear,  and a Citrine wagtail. 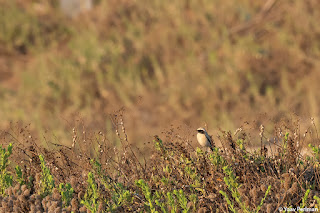 eBird checklist here. Thanks to Barak Granit for help with ID, and to Jonathan for good company. No selfie today!Thanks to Petteri Lehikoinen for pointing me towards the fascinating recent study.
פורסם על ידי Yoav Perlman ב- 9:56 PM