The first that got away

I had a meeting in Eilat today, conveniently timed for late morning so I could bird en route. First thing I was at Neot Smadar. I arrived there with low expectations - in recent years this site tends to be quiet. However, as I got out of the car, the air was alive with bird calls - pipits, shrikes, redstarts - very nice. I birded the fields with pleasure - Richard's Pipit flew over calling, Corn Crake, oddly alive and well, jumped up from the tall alfalfa, a Sooty Falcon zoomed through, and a Black-winged Kite that's less common in this part of the country perched up on wires: 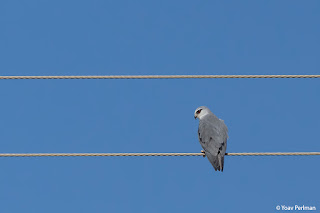 At a spot with some Willow Warblers I tried the trick that rarely works, and played potential vagrant music. Booted Warbler - nothing. Dusky Warbler - nothing. Greenish Warbler - instant response, boom! I heard one classic Greenish Warbler call and immediately switched off my player. I heard another call, a call that I know so well, nice and clear, up somewhere in a tree a few meters away. I switched on my sound recorder - but nothing! Two calls is all I heard. I was all pumped up and searched for the bird but frustratingly saw only willows. I tried hard to find the bird or get some vocal response, but nothing at all. After about an hour I gave up and had to leave. Shame. There are no records of Greenish warbler in Israel, yet. I am 100% confident this was a Greenish Warbler - this is a call I know very well and I heard it perfectly. However, I know that for a country first some kind of documentation is necessary. Therefore, no cigar today.
eBird checklist here.

With Adrenalin still pumping, but feeling disappointed, I moved on to Yotvata circular field (rather dry and empty) and on to Eilat, where an Oriental Honey Buzzard casually flew over the road by the IBRCE.
After the meeting I went over to KM20 saltpans, that were full of shorebirds - quite impressive actually, haven't seen the saltpans like that for a long time. It was very hot and windy, not ideal conditions for careful scanning through the hundreds of Little Stints. Best I could come up with were a couple of Broad-billed Sandpipers and a Red-necked Phalarope. eBird checklist here. 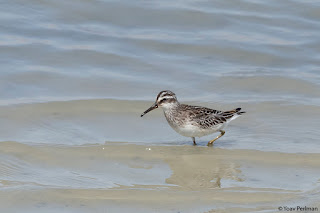 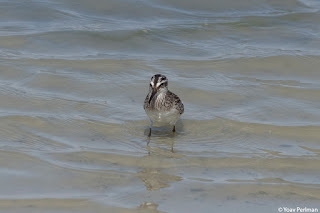 On the way back I stopped at Neot Smadar for another go, but it was still very hot and windy, and bird activity was low. Of course there was no further sign of the suspect. Fingers crossed it will be refound in the next few days!
פורסם על ידי Yoav Perlman ב- 8:48 PM