Yesterday Global Big Day team reunited to take part in October 2019 GBD, organised by eBird. Jonathan, Re'a and I were joined by Piki. Rather than darting across the country like we did in May, we decided to focus on the Bet She'an Valley. I had high hopes for the day. The idea of spending a full day birding in this bird rich valley, actually enjoying birding rather than driving around, was very attractive. Things were off to a good start with Barn Owl before dawn. Our dawn birding spot was the fantastic wetland below Kfar Ruppin, by the Jordan River. The first 48 minutes were both productive and enjoyable, with 65 species and quality that included Daurian Shrike, Pallid Harrier, Ferruginous Ducks, Spotted Crake and many more (eBird checklist here). Moreover, the sky was just full of thousands of birds flying in all directions, leaving their roosts to feed in fields and ponds. This pic of Daurian Shrike in half-light is so bad it's almost beautiful: 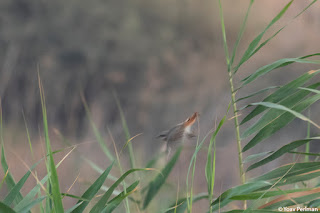 We then continued to check alfalfa fields and more fishponds around Kfar Ruppin and Tirat Zvi, but then things starting to go a bit off. On the one hand, this continuing sensation of tens of thousands of birds filling the sky – kites, pelicans, storks, herons, egrets, spoonbills, pipits and wagtails flying in all directions was quite awesome. 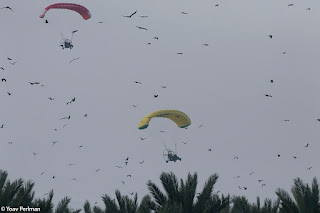 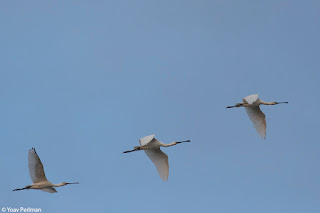 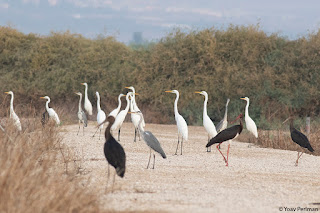 We also connected with some quality species, including Oriental Skylark, Richard's Pipit, Red-crested Pochard and such. 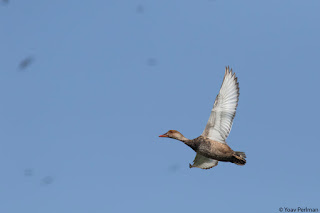 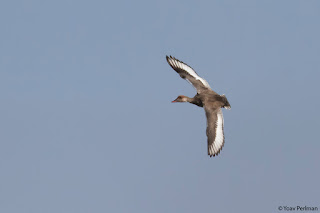 However, we witnessed a complete and utter lack of migrants – there was no raptor migration whatsoever, and we missed too many regular passage raptors. The whole niche of woodland/scrub passerines was missing. We failed to find common migrants such as Blackcap! Also shorebirds put on a disappointing show with very low diversity. Combine that with bad luck and regular big day randomness, and we ended the day with a shambolic 130 species. At times birding was slow enough that we had time to appreciate the fascinating wasp Ammophila rubripes: 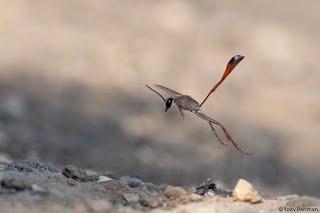 The day was saved by a proper rarity that showed up nearby. Galit Moshe and Eran Banker expertly found a Paddyfield Warbler in Neve Ur, at the edge of the valley. We headed over there in the early afternoon and enjoyed surprisingly good and prolonged views of this skulker at an impossible habitat. This is the 13th record for Israel but the first field record – respect to Galit and Eran. Thanks aso to Barak who 'kept' it for us.
It was not very easy to photograph, though, especially with the harsh light. Maybe not the best of my images, this is the most demonstrative image I managed, showing the strong supercilium with darker upper border, dark smudge at tip of lower mandible, short primary projection and well-patterned tertials. 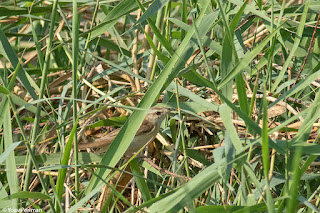 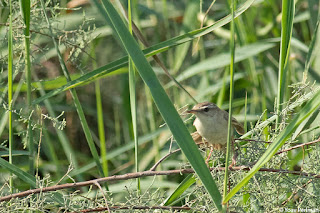 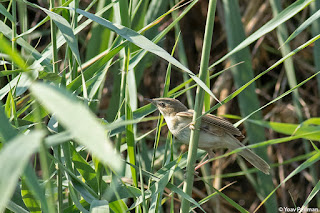 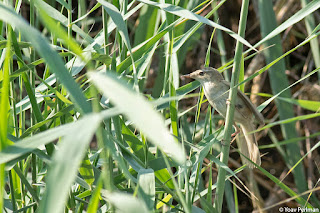 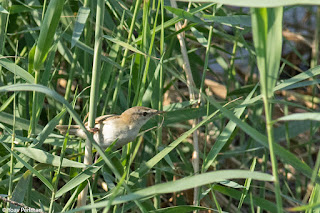 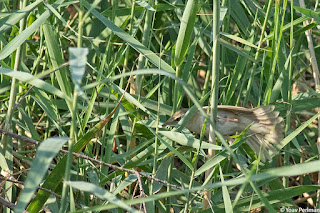 The abandoned fishfarm, now overgrown with reeds and tamarix, provides fantastic habitats for birds. Even in the heat of the day we managed 64 species there (eBird checklist here). 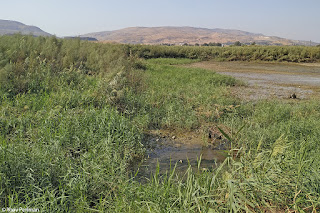 This concludes another Global Big Day. I assume that some readers of this blog will sense it was actually a brilliant day, but our personal feeling was different. But hey ho, that’s how big days go. And of course, in a broader view, it was a full day of high-intensity birding, with great birders who I am lucky to call my friends. Many thanks to Piki, Re'a and Jonathan for their huge efforts and for the good fun and laughs. Hats off to eBird for organising another wonderful international event. And as always, my gratitude is to Swarovski Optik for allowing me to use the best optics in the world.
Here's to the next GBD!