This morning I went with Piki to Ma'agan Michael. Over the last few days an accumulation of some quality shorebirds on the beach developed there, which required my attention. I don't know why, but there are no empty fishponds this year. As a result, all shorebirds are concentrated on the few beach lagoons. It's Jewish New Year holiday now, which means that the always busy beach is extra busy now. When we arrived early, there were already tens of people, dogs, cyclists, powered parachutes, boats - complete mayhem. Unfortunately, also a few photographers and birders were a bit too assertive approaching the shorebirds. And some beach-goers seemed to enjoy deliberately flushing the birds. The poor birds were up in the air constantly, first fleeing from lagoon to lagoon, then they gave up on foraging and went to rest on offshore rocks. Until they were flushed from there by fishermen too. 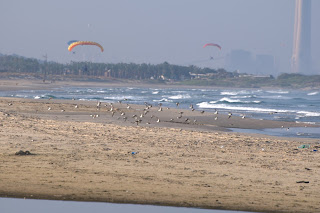 It was a real pity because that fair concentration of shorebirds contained good species (locally): 3 Bar-tailed Godwits, Red Knot, Broad-billed Sandpiper, 6 Citrine Wagtails and a good potential to host a vagrant among the hundreds of calidrids and plovers. But viewing them was difficult because all birds took off repeatedly, offering mainly flight views. 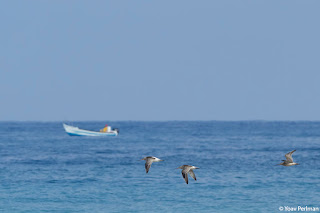 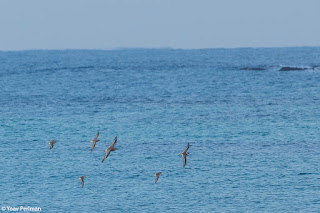 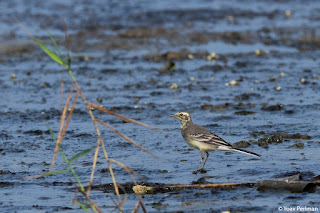 Just as we decided to leave this hopeless scene, I spotted at a distance a young gull that looked promising for Audouin's Gull. Just too distant. Frustratingly, when we approached but it was still too far away, it disappeared before the ID was clinched. Hope it reappears.
It is a shame that this globally important bird area suffers from such disturbance. Personally, I can't roll my eyes and say passively 'something needs to be done'. That's my job; I need to do that something myself, with my colleagues. Fingers crossed some ideas there will work out in the future. At the moment, the birds and birders need to wait until the Jewish festival season is over, for some relief on the beach.
eBird checklist here. Thanks to Piki for the company.
פורסם על ידי Yoav Perlman ב- 7:09 PM