Yesterday I teamed up with Jonathan and Re'a to take part in Global Big Day. Our plan was to record as many species as possible, and also to connect with some specialties that are less likely to get recorded elsewhere. We did not plan our route too carefully, as this was not a competition but a challenge, and we were prepared to adjust and be spontaneous if necessary. Still, our plan was pretty ambitious - it included cross-country, night-to-night birding. I set off after 02:00 to meet up with the others. Just outside my town a European Nightjar was sat on the road - good start! We then drove al the way up to the Hula Valley. In Ayelet Hashachar we had a vocal family of Tawny Owls, but failed to find other owls. Luckily Jonathan had scops and long-eared before we met up. 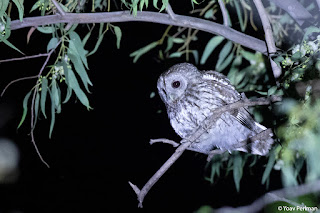 We were joined by Hula-man Nadav for an hour of dawn birding at Agamon Hula which was pretty sweet. 76 species, highlights included White-tailed Eagle, Black Francolin, Marbled Duck, Golden Oriole, Spotted Crake and many more (eBird checklist here). Perhaps most impressive was a phenomenal roost take-off of Sand Martins. We VERY conservatively estimated 20K, but in the car quietly suggested six-figures. Quite a spectacle. A jungle Cat that trotted along in front of our car at dawn was sweet too.

From there it was up to Mt. Hermon. We first birded the slope above Majdal Shams. We clocked on first Hermon specialties quickly, most importantly Syrian Serin that I don't think was recorded elsewhere in the world. This area was also productive for quality migrants - Barred Warbler and Wood Warbler. eBird checklist here. 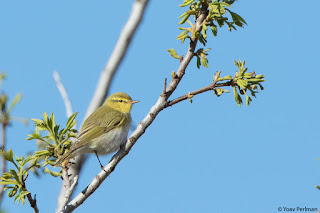 As soon as the military checkpoint opened up we sped up the mountain towards the lower cable station. We did a quick, clean sweep of Hermon specialties, including Western Rock Nuthatch and Sombre Tit (eBird checklist here). Even though we rushed it, it was still fantastic to take in the breathtaking scenery and cool temperatures at this altitude, where spring blossom has not diminished yet. 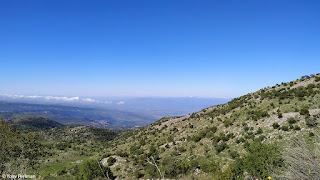 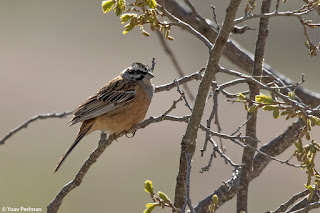 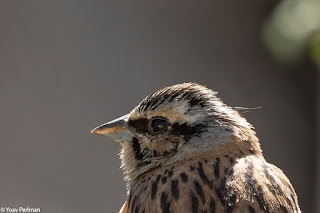 Next stop was at Susita, overlooking Lake Kineret. We quickly found there Long-billed Pipit and other batha specialties, and enjoyed a bit of raptor migration (eBird checklist here). During the entire Big Day we never connected with proper raptor migration - shame. Then it was on to Kfar Ruppin in the Bet Shean Valley. By then it was scorching hot and bird activity was relatively low. Took us a while till we found a good fishpond that contained many shorebirds, though variety was somewhat minimal ('only' 60 species in an hour of birding). Roller, Osprey, Curlew Sands were some notable birds - eBird checklist here.


Then it was the long, exhausting drive all the way to Ein Gedi. We easily found almost all desert birds we looked for - Fan-tailed raven, Barbary Falcon, Sand Partridge, Arabian Babbler etc. (eBird checklist here). Things were looking pretty good! 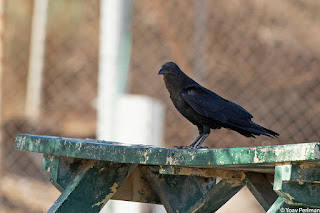 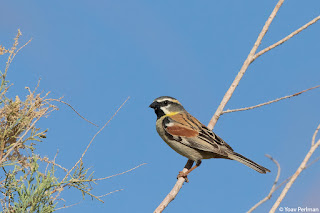 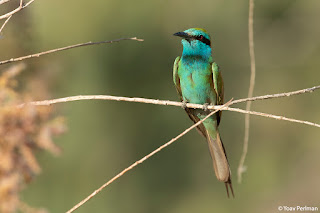 Too close - see below 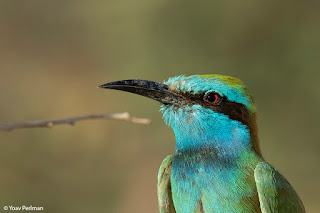 After dusk we efficiently connected with two iconic nightbirds - Nubian Nightjar and Desert Owl (is it the first time ever Tawny and Desert Tawny were sen in one day?) - a fitting end to an epic day.

Our cumulative total was 164 species - Jonathan missed few species Re'a and me saw before meeting up, and vice versa (my personal total was 160). It was so much fun - good, solid birding all day long. Our route was a bit extreme - I drove 870 km, and of course we ran out of time and had to skip one site (Mt. Amasa). But all in all I think we did pretty well. As in any Big Day, we missed many silly birds (such as Great White Pelican, Scrub Warbler), saw few birds we hadn't expected (Wood Warbler), enjoyed bird-rich sites and casual flybys and 100 kmph gifts (Raven, Little Swift) - that's what Big Days are made of.

A few thanks to summarize:

Jonathan, Re'a and Nadav - you guys rock. I thoroughly enjoyed spending the day with you, we never stopped laughing and our spirits were high throughout (when you were awake...). Thank you!

eBird Central organized this amazing event - I feel privileged to work with you guys and call some of you my friends.

Swarovski Optik - thanks, as always, for giving me the opportunity to use your supreme optics, that certainly made the difference. 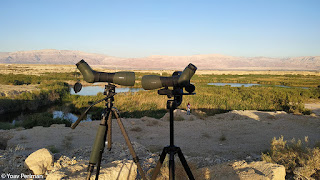