A few more days of birding produced some pretty good stuff. Yesterday, while I was heading towards our main offices in Tel Aviv for meetings, Yuval Dax alerted of a Great Snipe he had just ringed. Luckily, it was a short detour for me, so I was on site very quickly to see the bird before release. Top class bird - I have been trying to find one in recent weeks without success. Well done to Yuval and thanks for letting me and Jonathan join in and enjoy the bird. 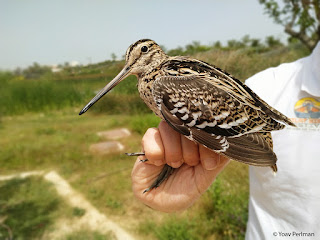 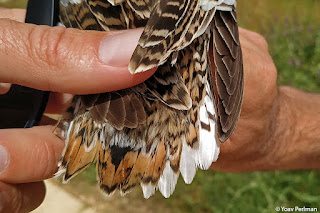 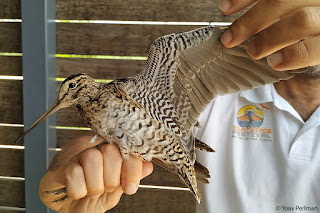 This morning I did more fieldwork in batha habitat north of Jerusalem. Weather was unstable and overcast, and bird activity was pretty low - birds were very quiet and kept a low profile. Still I managed to find breeding proof of most priority breeding species (Long-billed Pipit, Spectacled Warbler, Cretzschmar's Bunting), saw both Rock Sparrows, and a mobile Upcher's Warbler that was clearly a migrant. I did not photograph a single bird this morning, did a bit better with common butterflies: 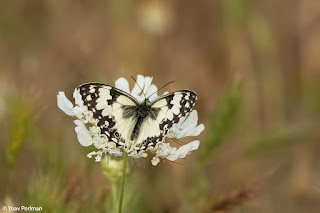 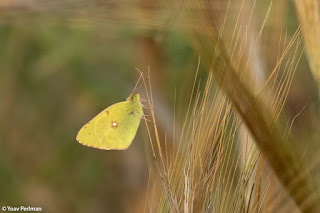 On the way out I was surprised by a large, dark falcon flying low over the road. I pulled over dangerously, got the bins and camera out - dark morph Eleonora's Falcon! I was really excited - not so rare in Israel, especially now, but this was the first individual I photographed. Light conditions were horrible, sadly... 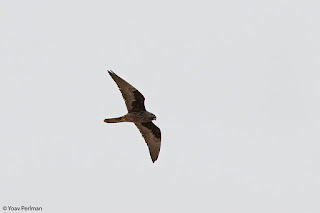 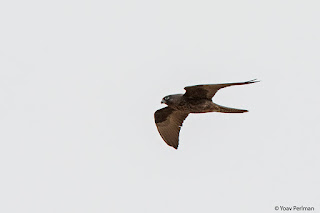 After a couple of flybys it headed north - unbelievably (for me) I managed to get a sharpish photo of it a mile away: 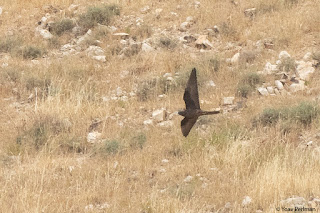 On the way home I made a quick midday stop at the JBO, which was actually whopping with birds (eBird checklist here), possibly due to the weather change. I was there just after the morning ringing session had ended, so unsurprisingly many of the birds present were ringed. Up till now it's been an awful season for Olive-tree Warbler in Israel. While an average early May visit to JBO should produce double figures, this year only two were ringed so far. Yet I managed to see one - an important year tick... Sadly I forgot to change camera settings after my Eleonora's encounter, so most images I took came out useless. Only few I managed to salvage. 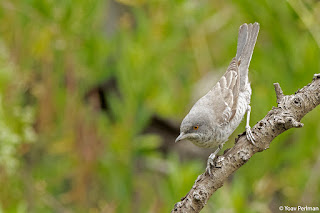 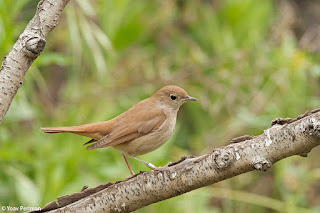 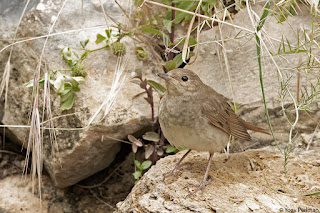