I left Norwich early this morning with Phil and Will, with soaring expectations: weather conditions could have not been better for a fall, and/or for something really good. Burnham Overy Dunes was our choice. We were surprised to be the first birders there. As we walked out, the White-winged Tern showed nicely, albeit distant and in bad light conditions. A bird I wouldn't twitch in the UK, but was still really nice to bump into: 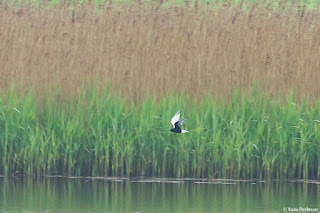 We worked the dunes hard, again and again, from Gunn Hill to the woods. At first there were no migrants to be found at all; evidently there was no fall. In those moments of disappointment, someone always uses the useless phrase 'biggies always travel alone'. If there were any biggies around, we missed them. News started to pour in, of decent arrivals and scarcities elsewhere in Norfolk and along the east coast; this enthused us to do another circuit of the dunes, and another... Then we had to move on, leaving the dunes goodies to be found by others. Between our group of 4/5 (including James and Dave Appleton) we did find eventually singles each of Pied Flycatcher, Common Redstart, Tree Pipit, Whinchat and Cuckoo. There were also 3 Wheatears, presumably local breeding birds. A Little Ringed Plover flew by uttering its sad call over the saltmarsh, and a Merlin bombed around Gunn Hill. On the marsh the distinguished residents showed OK - Spoonbills and Great White Egret. Two Barn Owls hunted out in the open - always fun. On the way out, several Bearded Tits pinged from the reedbed, and among a distant group of lingering Brent we found a striking Pale-bellied. The total for the morning was 95 species (check my eBird checklist here) - not bad I guess. And if you read the list above it feels like a pretty good morning. However, my expectations were much higher, both for quality and numbers. But hey, better to look at the bright side and enjoy what we did see, which ain't too shabby. 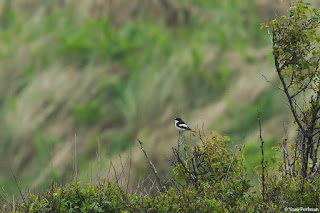 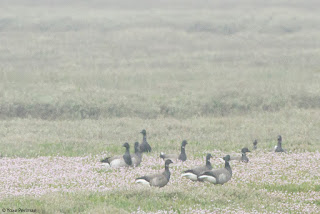 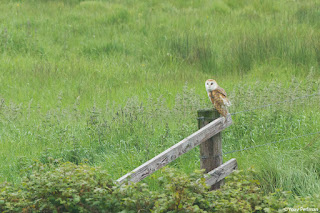 Some other fauna and flora included:

One of quite many Wall Brown 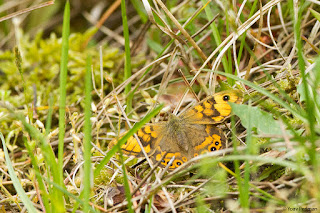 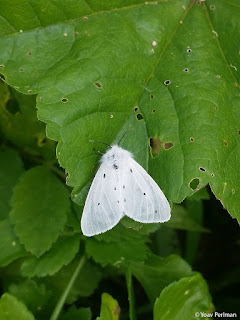 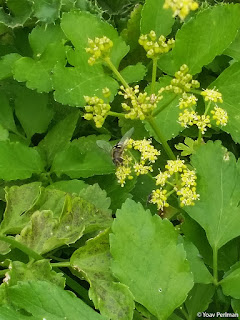 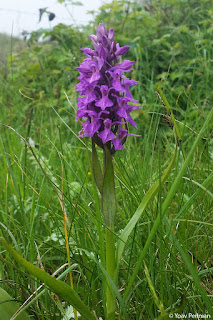 We then went to Titchwell for a quick visit. The Greenish Warbler was surprisingly vocal in the midday (relative) heat, and showed OK, demonstrating its very faint wingbars; sadly I failed to get a decent photo. 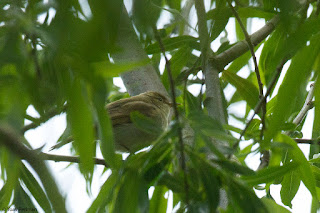 I sound-recorded its vocalisations with my phone. Song came out rather OK; I need to work more on the calls. James got similar results with his iPhone...
We drove back by Choseley, where we added Corn Bunting and Yellowhammer to our day list, bringing it up to 99.
Thanks to Will for driving there and James for driving back; good day out - maybe there still is another chance for a fall or a biggie this spring.
פורסם על ידי Yoav Perlman ב- 11:07 PM