After a few days of not going to see the Green Heron, today I finally joined a few desolate souls who needed it (James, Joe and Will who didn't need it but joined anyway); we set off from Norwich early, though probably not early enough. The drive there was long (6.5 hours) and we got to Llan-mill in Pembrokshire just after the bird had ended its morning show. It was on view immediately as we arrived (tick!), but it was active for just another 20-30 minutes; then it took a siesta. It foraged a bit in the small pond - we saw it catching mainly newts. It is a great looking bird - very bright and attractive, and I am very glad I made all this long way to see it. We had brilliant views, especially through the scope, but photographically I was a bit disappointed with my results using my camera gear. It was just a bit too distant for real quality shots, and often partly obscured by branches. Those who digiscoped fared much better. I missed a foraging jump-shot because I was faffing around with my phone, and got it just as it jumped out of the water. Ah well. 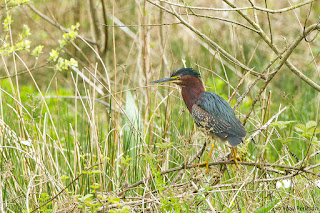 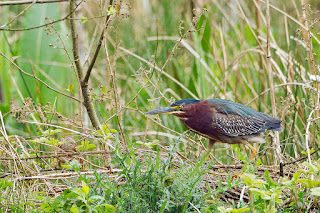 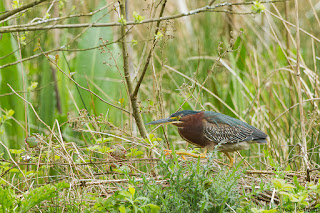 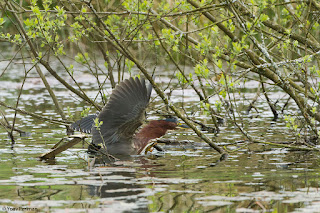 Scanning the sky for a passing Red Kite 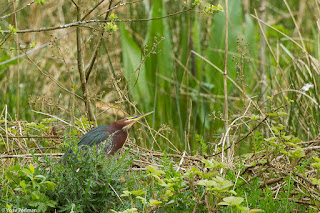 Thanks to our hosts Simon and Abigail who generously opened their lovely garden to the many visitors. The pond where the heron is was created and is managed by them.

There was some bird activity in the garden and its vicinity, including this nice male Blackcap: 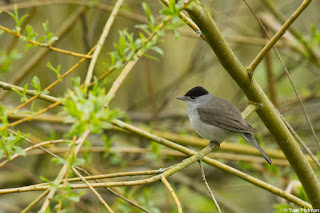 For my non-British readers, just a bit of context: This rarity has stirred an extraordinary discussion among twitchers, because of its unique circumstances. Simon Hart who found the bird in his garden was heavily criticised by some birders for his past and present roles in the Conservative Party, Countryside Alliance and SongBird Survival. Countryside Alliance backs intensive management of grouse moors for driven grouse shooting, with all the serious issues related to grouse moor management that include illegal raptor persecution; SongBird Survival has (in my opinion) a controversial attitude towards 'Problem Wildlife'. Some birders called on social media to boycott this bird, and a rather ugly and childish banter began online. Personally, I try not to take this hobby too seriously anyway. I felt that the opinions expressed by some birders, whether I agree with them or not, are irrelevant to this twitch. I am happy that we went for it today.

On the way out we stopped to admire some Early-purple orchids just outside of Llan-mill. Beautiful flowers. 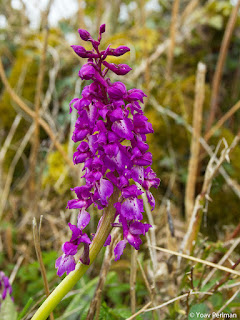 And then it was the looooooong way back. We almost drove back via Harris, but decided to give it a miss this time. Many thanks to James, Will and Joe for a brilliant day out.
פורסם על ידי Yoav Perlman ב- 12:44 AM