As I drove back from Yorkshire (more to come on this...) on Sunday evening, I was saddened to witness a beautiful sunset in a clear sky over the North Norfolk coast. The Moltoni's Warbler (another brilliant find by my mate Dave) was last seen in the late afternoon. I guessed it might have moved on last night, but decided to give it my best shot. In a somewhat masochistic way, I like the walk to Blakeney Point, and hoped to find some other stuff if Mr. Moltoni made a bunk - the weather still felt rare. When I started walking from Cley beach carpark this morning there was already negative news from early birders. Those who have walked to the Point know that there's a lot of time for thinking along that loooooong shingle bank. I had plenty of time to think about dips and the reasons why I still twitch. I started encountering dead birds in an increasing rate. Alcids, first of two very fresh Kittiwake, Teal, Lesser Blacked-backed and Common Gulls, Cormorant. Pretty morbid. Some of the alcids had been on the beach for a while, perhaps a few weeks, but not too long, as they were all in summer plumage. I did not spend time opening their stomachs - I was trying to get to the Point as quickly as possible. However, out of the open bellies of three auks plastic bits stuck out. They were all decapitated by some necrophiliacs, so identifying them was not easy.  I think most were Guillemot, with fewer Razorbill and Puffin. 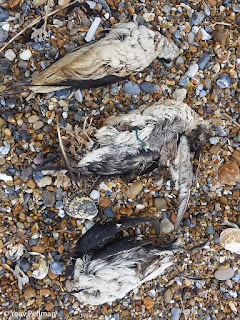 So sad to see dead Kittiwakes, in context of their dire state in the UK as published today in The Guardian. 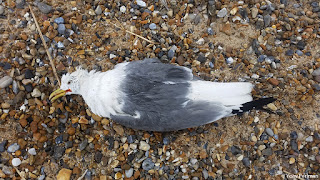 Anyway, eventually I got to the Point. I first checked some bushes between the huts, and flushed a tiny acro out of a bush. It flew right past me at close range, I noticed it was very short- and rounded-winged. It flew around a hut. I walked there and saw it perched on a bramble for a split second. I immediately noticed a bold supercilium, but then the bird shot off to the east, behind another hut and I lost it. Paddyfield Warbler! But I was unsatisfied with the brief views, and left it as a 'possible'. I spent a few minutes searching for it but could not relocate. I alerted some birders around, and headed off to try my luck with the moltonis. I was surprised to be alone on site but at least there was no annoying chit-chat. The weather was pretty grim with strong wind and constant drizzle. The bird did not show during the couple of hours I stood around - must have moved on last night. Dip. I did have a trickle of migrants popping in the garden briefly - Tree Pipit, Spotted Flycatcher and Chiffchaff. A spoonbill flew east miles away. 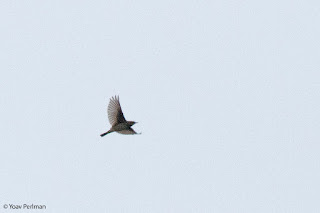 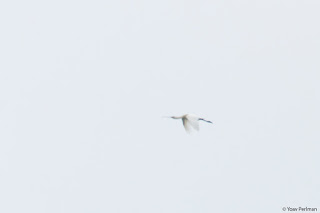 Quite a few Cinnabar Moths on the dunes - my phone camera wouldn't focus, sorry: 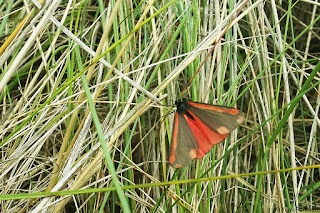 Before walking back, I picked up a garbage bag from the wardens, planning to collect some plastic and other rubbish en route. I was shocked by the amount of plastic. I filled the large bag up until it almost burst within 500 meters. I kept on finding dead birds. I was frustrated that I could not pick up more plastic because my bag was full, knowing the rubbish would wash back into the North Sea at the next high tide. My spirit was not very high.

I continued to walk faster low down on the sand, avoiding the shingle. Mistake.When I got back to Norwich, I learned that James McCallum had found a tame paddyfield on the shingle a couple of hours after I had passed below there - must have been an beautiful experience. If my bird was indeed a paddyfield, it may or may not have been the same bird - who knows. My bird disappeared in the right direction but James described his birds' behaviour as a bird fresh in off the sea and reckons his was a different bird. Who knows. 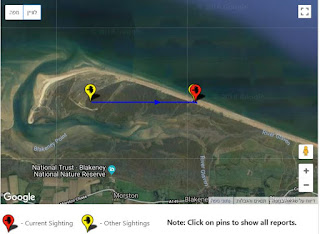