Why I think the Mt. Amasa wheatear was chrysopygia

On the 10th of March this year an intriguing wheatear was found in Mt. Amasa, on the southern slopes of the Judean Mts. This is one of my favourite parts of the country and birding there in march is just brilliant. The bird was first noted by Igal Milchteich and David Raved. At first it was identified as a female Kurdistan Wheatear (Oenanthe xanthoprymna). Very nice but nothing too extraordinary - several are recorded in Israel annually. Then some doubts arose regarding its identification, because of its large size and very long bill, and general plumage tones that didn't quite fit. Only a few days later images of its pale underwing coverts were taken, suggesting it was in fact a Persian Wheatear (Oenanthe chrysopygia) - boom! 2nd record for Israel if accepted. First record was in 1990 in Nizzana.

This image is by Rami Mizrachi, showing nicely the pale underwing: 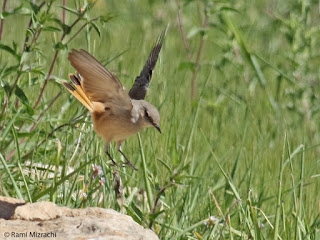 I was most intrigued by the prominent rufous tips to tail coverts, something I have never seen on Kurdistan Wheatear before. Obvious also in these images by Micha Mandel: 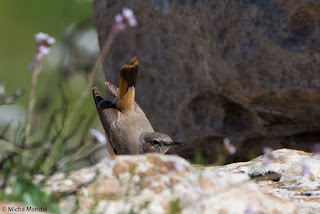 Check the monster bill in this image: 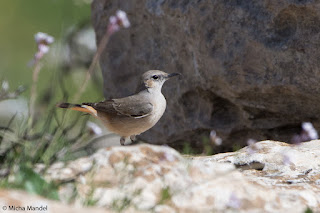 A few days later Yosef Kiat trapped the bird, measured it and kindly allowed me to use his photographsץ Yosef idenified it in the hand as a 2cy. 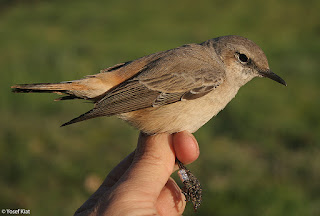 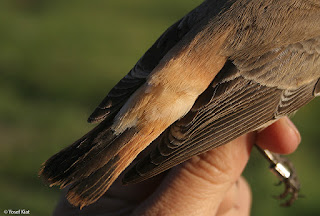 Grey crown and nape, and rather contrasting rufous ear coverts: 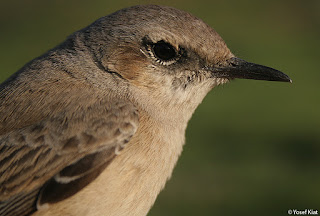 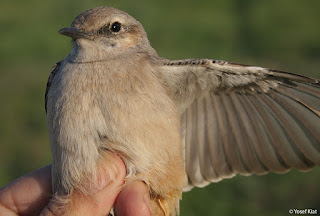 During my brief visit to Israel for Champions of the Flyway I paid the bird a quick visit, and was really impressed by its size, elongated head and long bill; it felt very different from my experience with Kurdistan Wheatear, which is smaller, with a 'cute' round head and shorter bill. I didn't get very good photos of it, sadly: 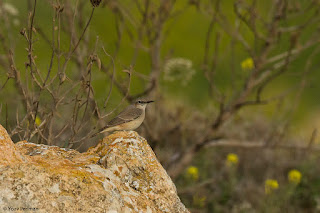 During Champions of the Flyway, I had some discussions on the bird with Hadoram Shirihai and other birders who saw the bird. Hadoram raised doubts about the identification as chrysopygia, and told me about scary hybrid populations that could look similar to our bird. As a good student of Hadoram, I learned never to accept the wisdom of others more experienced than me, and doubt everything said to me.
A few weeks ago I visited Tring. After I was done with my main mission (Nubian Nightjars), I had a short while left to give the wheatear trays some love and attention before the museum closed down. I took quick measurements of chrysopygia (n=13) and xanthoprymna (n=18) - I focused on three measurements: bill to skull, amount of rufous on T1 (central tail feather) and T6 (outer tail feather). Here are the results:

First - bill to skull. In literature (e.g. here), xanthoprymna has a longer bill than chrysopygia. I found the contrary. Based on my measurements, chrysopygia bill (mean 19.6 mm) is much longer than xanthoprymna (mean 17.3 mm); there is even no overlap between the two taxa. You don't really need statistics to tell that this difference I measured is highly significant. The Israeli bird (blue star) fits right at the top of the variation of chrysopygia that I measured (20.4 mm).
In all graphs (this one and those below), thick black line is median, and top and bottom of boxes are the 75th and 25th percentiles respectively. 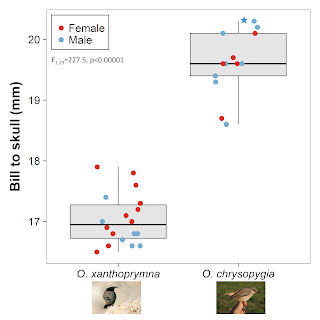 Next - rufous on inner and outer tail feathers. Here, chrysopygia shows more rufous at the tips of both tail feathers - means of 3.65 mm on T1 and 3.42 mm on T6, compared to xanthoprymna with 1.64 mm and 1.36 mm respectively. These differences in amount of rufous at tail tip between the two taxa are significant too. But this is not the main point. My results show that all chrysopygia I measured had a proper rufous terminal tail band (as implied by its scientific name).
Contrastingly, xanthoprymna showed variation in this feature - some individuals had a tail band and others did not. This means (based on my measurements), that if a bird has a proper rufous tail band, it can be both, so this is only a supporting feature for chrysopygia; if it doesn't have a rufous tail band it is a xanthoprymna. Interestingly, this feature is shown in the plate of Collins Bird Guide 2nd edition, but not in the text. Sadly, Yosef didn't measure the amount of rufous on tail tips, but from photos it is obvious this individual has a proper terminal tail band: 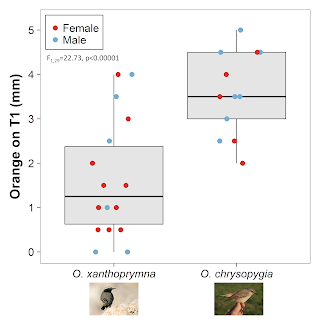 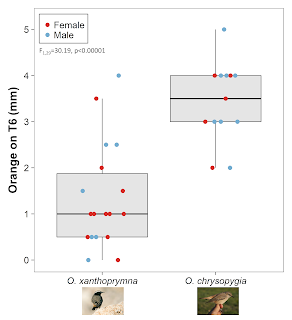 This is an example of a xanthorpymna with more rufous on the tail: 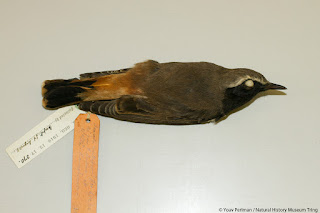 Some necessary caveats about my measurements:
To summarise, in my opinion the Mt. Amasa bird fits with what is currently known about chrysopygia plumage: pale underwing coverts, blue-grey crown and nape, brown ear coverts. The Israeli bird fits well with what I measured as chrysopygia (but this is contrary to some literature); and tail pattern fits chrysopygia too ('which is only a supporting feature).

I don't know enough about kingi and cummingi; however, with the current knowledge and my results here, I suggest this is chrysopygia. I have asked the opinion of several birders who see many chrysopygia, and they have a similar opinion to mine. It is possible that there is an unknown population of chrysopygia with a long bill, that I am not aware of. However, currently, I think it is safe to place this bird in the chrysopygia camp, rather than xanthoprymna or hybrid.
If and when new evidence shows that this individual is closer morphologically to another taxon, I'd be really happy to learn more and reassess my results here.

Now it's up to the Israel Rarities and Distribution Committee to make a formal decision (I am a member, so my vote is clear now).

As always, I am grateful to the staff of the Natural History Museum at Tring for their welcoming and friendly approach, especially to Hein van Grouw and Mark Adams. Many thanks to Rami, Micha and Yosef for allowing me to use their photos here. Anderson Saldanha Bueno assisted with creating these graphs.