We are very lucky to work here in Castro Verde. This is the most beautiful and biodiversity-rich steppe region in this part of Iberia, or maybe in entire Iberia? Or in the world? Anyway it's fantastic here. We walk for many hours every day, and the reward is great birding and lovely landscapes. Here is a selection of some recent photos I took. I don't photograph that much because I have to work... but still I get some decent photo opps. Not like shooting from a hide or even a car, but I can't complain. As you may notice, in this part of the world it is possible to photo birds on a fence or in flight.

I will actually begin with the less spectacular group of birds, but they are ever-present and such good birds: larks. Commonest species is Calandra Lark, a magnificent mimic and one helluva lark. It's display flight is quite spectacular. They are found in good densities here, in pastures. In recent days, numbers of Short-toed Larks increased considerably too, and they are seen singing and displaying in good numbers in legume fields and dry pastures. Thekla Larks are found in the scrub-covered sections of the park. Theklas are birder's birds - notice the stubby, pointed bill, heavy breast streaking, general warm brown tones, and overall stocky structure. 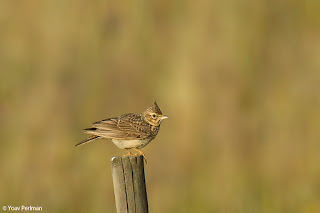 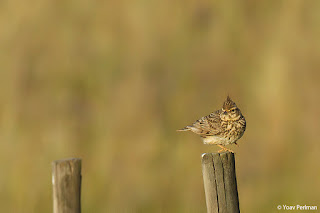 This is how I see most Calandra Larks: 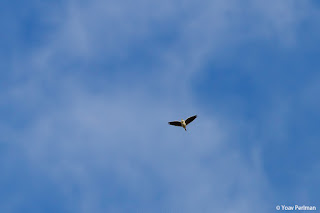 On the deck they are quite skittish 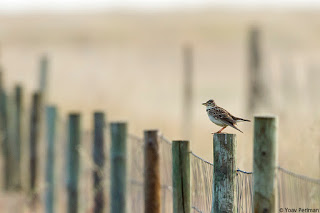 Greater Short-toed Larks are pretty mobile too, but sometimes they do settle down 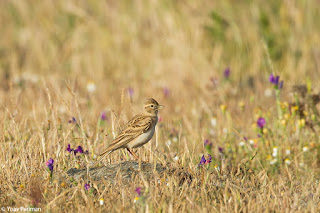 Little Bustard is one of the focal species of my research this season. Contra to Great Bustards that are well-monitored, little is known on the conservation status of Little Bustard in Iberia. In some parts of Castro Verde they are still found in good densities, for instance today we had about  40 singing males in an area outside the park. The males are heard singing mainly early in the morning, but are usually well hidden in the tall grass and hard to see well. Occasionally we get a showy bird - this macho showed off by a main track as we drove in at first light. These photos have been heavily edited to compensate for the bad light, and are not as sharp as I would want them to be. The males give their fart-call while whip-lashing their heads back. This movement is so quick, so with my slow camera and low light I couldn't get a photo of the head all the way back. What a bird! 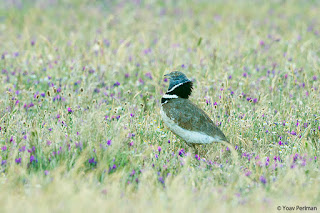 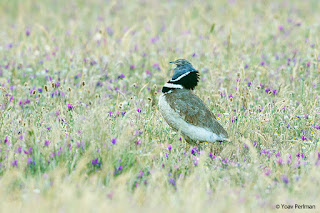 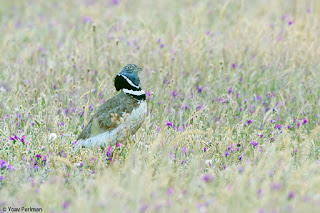 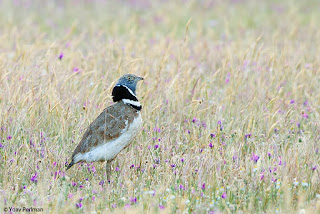 I took this short video - sorry about the noisy soundtrack (no external mic):


We see many Great Bustards - Castro Verde is their stronghold in southwest Iberia. However I usually keep my distance from them not to disturb them, though sometimes I get some close encounters and flybys: 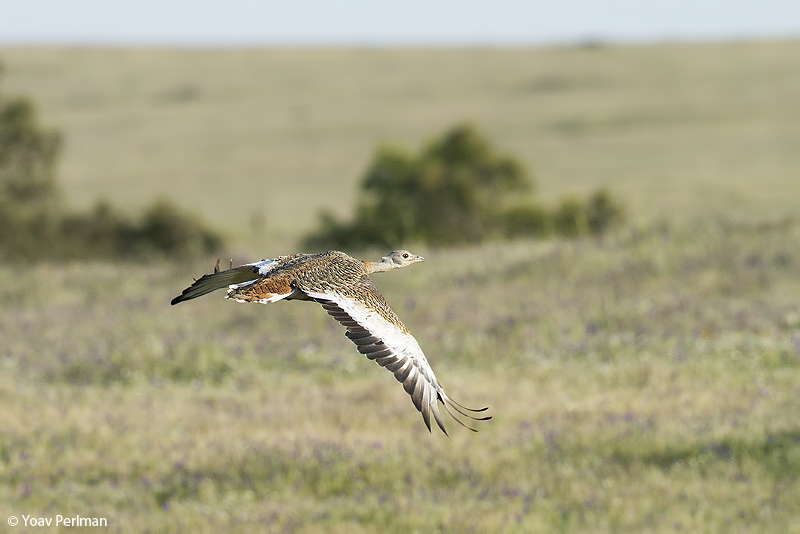 The adult males are some gigantic beasts 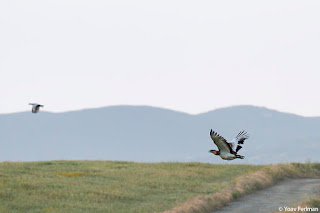 Even here is Castro Verde life is not always sweet for steppe birds. Fences are a real hazard, especially for a heavy bird like Great Bustard. I found the remains of a dead bustard that colided with a fence on one of my transects: 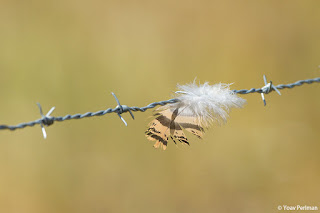 Black-bellied Sandgrouse are another symbol of the Iberian steppes. They are most often seen in flight, so we count them mainly in transects and not in point-counts. They are always located by their distinctive bubbling flight call. They do favour dry pastures and legume fields where they may be seen on the ground from a safe distance. 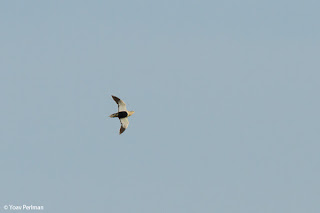 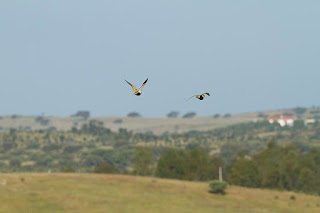 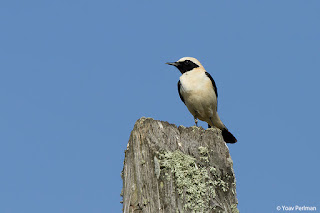 I find the white-throated morph much more attractive: 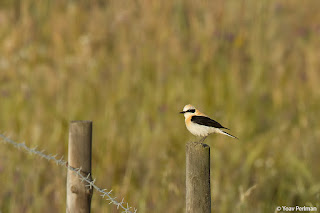 Yellow Wagtails are seen in small numbers in wetlands and creeks. Most are Iberian Yellow Wagtails. However, I am not sure which subspecies these are - at least the top bird looks more like flava, with a yellow throat and pale ear coverts and lores. Both were breeding, seen carrying food to nests. Quite a good local breeding record apparently. 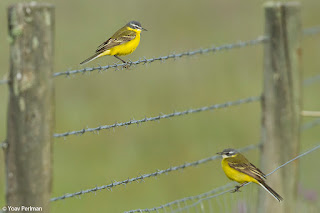 When the temperatures rise, raptors usually take off and are seen in relatively good numbers and diversity (compared to UK...). We search for rueppell's among the commoner vultures - no success yet. 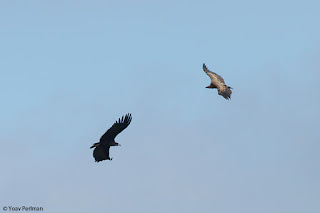 Red Kites have not been found breeding here yet, but they certainly seem to be in the business: 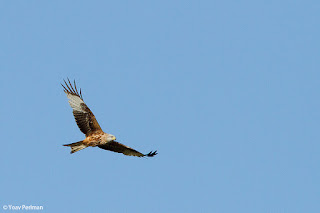 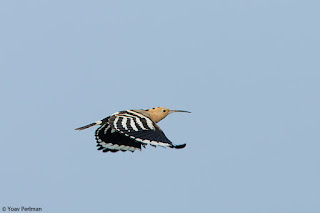 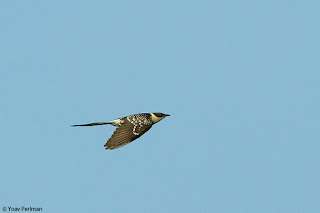 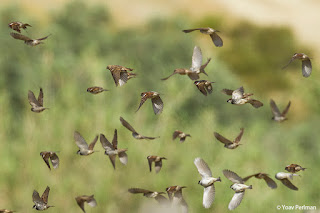 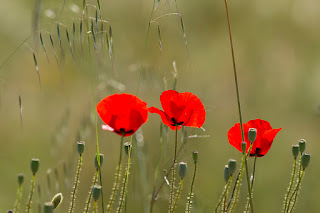 In contrast to the abundance of breeding birds, I am amazed by how few migrants we see. There are many breeding summer visitors, true (Lesser Kestrels, Bee-eaters, Nightingales etc.) but true migrants are extremely few and far between. Over the last week of walking, we had only one Tree Pipit, two Grasshopper Warblers, and one Northern Wheatear (in the Algarve).