A couple of days ago we left Castro Verde and headed north. Before leaving CV we worked in some peripheral sections of the SPA that were less rich than the central sections we had worked in. It was sort of an introduction to the low densities of steppe birds in the cereal and montado landscapes of northern Alentejo. We still had some bustards, larks and other steppe species but in smaller numbers. 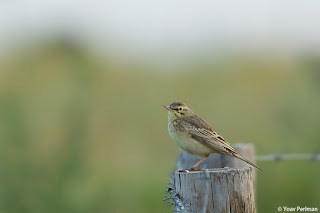 One for Dan - Clouded Yellow 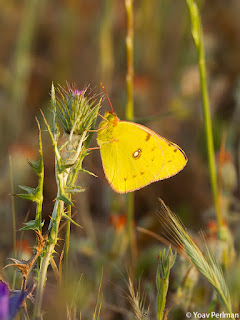 Campo Maior, where we are based, is a lovely and picturesque town from Roman times. It has one of the largest castles in Portugal, and we live in a small apartment right below the castle. 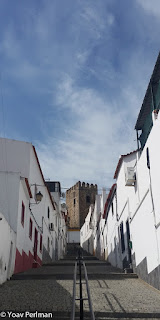 Every day we head out to survey the remaining patches of agro-steppe habitats in northern Alentejo. The region has transformed quite a bit since I last visited in 2015. More intensive agriculture, more permanent crops. And less birds. Near Campo Maior the small group of Great Bustards somehow holds on, but in Torre de Bolsa they are gone. Little Bustards are found in low densities. Sometimes they are found in sub-optimal habitats, and sometimes in really weird places. This poor male sang his little sad heart out in the middle of a recently-cut wheat field: 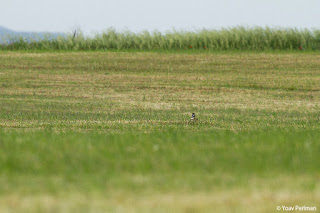 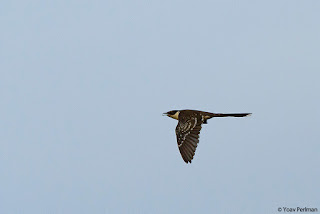 Still it's a pretty landscape 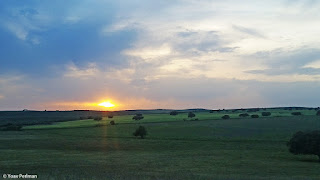 Today we worked near Elvas. I found a small, loose colony of Collared Pratincoles, about 15 pairs, breeding in a potato field. They kept their distance in the middle of the field: 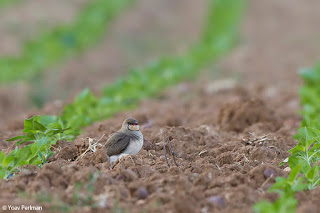 There are quite many Montagu's Harrier in this region (I even had a black-morph flyby today). Every time one passed over the potato field it was aggressively seen off by a horde of angry pratincoles: 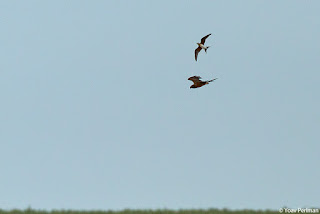 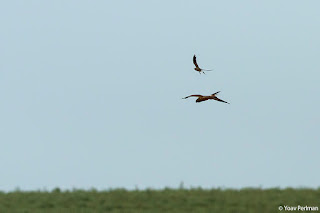 Our points and transects today flanked some better vegetated habitats, and in them it was clear that suddenly there were migrants around, probably knocked down by some pre-dawn rain. Among the three of us we had Willow Warblers and Iberian Chiff, Western Bonelli's, Whinchats, Savi's Warbler, Spotted Flycatcher, Tree Pipit, Garden Warbler and a few more. Nice! Today's eBird checklist is here. I had my lifer Red-necked Nightjar today - a day-roosting bird found by Dan; it didn't stay for photos sadly. Another cool bird we had a few of today is Melodious Warbler. One male showed really well as he sang on top of low vegetation, but the light was rubbish. 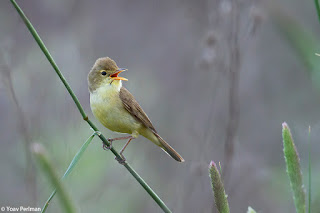 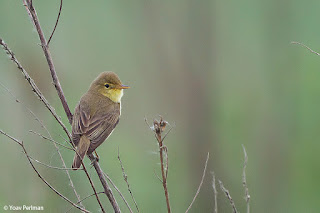