A day with a lifer can't be that bad, can it?

Today was our day off, and we ventured to western Extremadura in search of some quality birds. It was a long, exhausting day with generally unfriendly weather. We started off near Lobón, where the road to Montijo crosses over the Guadiana. My good friend Fergus discovered some singing Western Olivaceous Warblers there a few days ago. When we got there it was pissing down with rain. Dan and myself felt quite at home, but it was not great fun. We got our first western olly very quickly, and then another 4-5, but the birds were hiding deep in trees, understandably. It was pretty nasty. Tough to photograph. Later on it rain even harder, then it was just an annoying drizzle, then it hammered down with rain and then we buggered off. I was happy to see these birds - one of the few lifers waiting for me here in Iberia is now 'in the bag'. I expected a much larger-billed bird, which in the field wasn't very obvious. However, in the photos, the bill certainly looks big. Note also the brownish tones and long primary projection. They are pretty big! And their song doesn't sound anything like eastern olly; in fact it is very similar to the song of Reed Warbler. 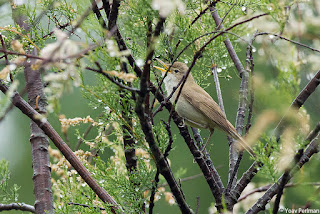 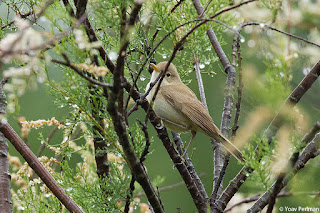 It was actually pretty birdy there, especially when the rain had slowed down. Tons of nightingales, many acros, some sylvias, singing Orioles, Penduline Pits, and a mega trip tick - Wren!

Before meeting Fergus in Merida to pick up keys for our next apartment, we had time for a quick look in Alange. It was a magical few minutes with Black Wheatear, Rock Buntings, Blue Rock Thrushes, Crag Martins and Alpine Swifts all in the same spot. But the weather was still awful. The wheatear was perched high on top of the cliff. We had a quick look around the village for more wheatears but no success. The weather did improve though, and the view was fine.

We met up with Fergus in Merida, where we have already added Little Ringed Plover and Grey Wagtail to the apartment list. Then we headed south to the Hornachos Mts., in search of Cirl Bunting and Western Orphean Warbler. 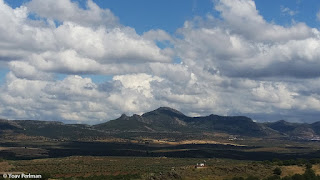 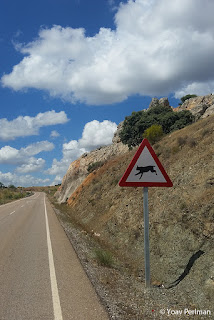 Now it became very hot and very windy; the sun was harsh and the conditions were not great. We worked hard for little reward - I glimpsed a Cirl Bunting, and Dan a Western Orphean, but views were far from satisfactory. We added a few more trip ticks but it was pretty slow and disappointing overall. Nothing too special but I really enjoyed the local Long-tailed Tits of the Iberian race irbii - very richly toned below: 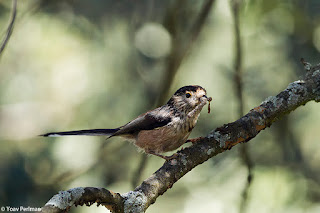 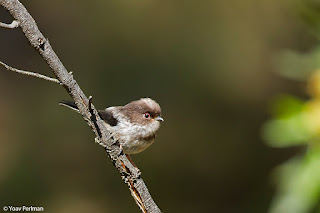 We returned to Alange for seconds, hoping to improve our views of Black Wheatear. With such strong wind we had little chance to connect with White-rumped Swift.  Next time. The wheatear was slightly more cooperative but I still have not nailed it. 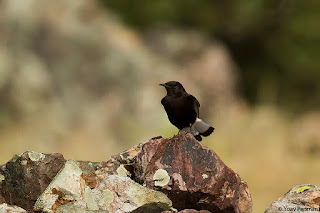 Then it was the long way back to Campo Maior, with a weird sense of frustration and fatigue. In a couple of days we are done here in Alentejo and we move to work in Extremadura. Looking forward.