Too late to blog so I will do it short. Hey, sleep is completely over-rated. Difficult weather in the morning. Force 7 westerlies but I headed out anyway. Walked through Clevygarth towards Virkie. Hoped for a Buff-breasted sand or something like that but nothing good. Few passerine migrants but plenty of snipe on the wetland. Among the 50 or so commons were at least 8 Jack Snipe - not bad. A pair of Bonxies followed me closely: 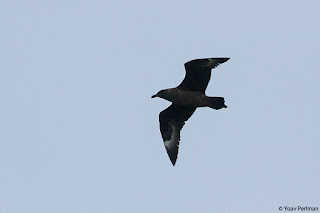 Then I went with Gary to Lerwick to do some stuff. There were about 200 Eiders in the harbour, and two sweet Black Guilelmots: 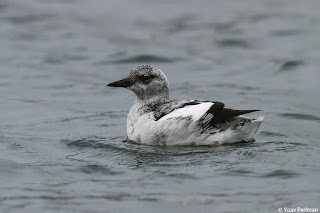 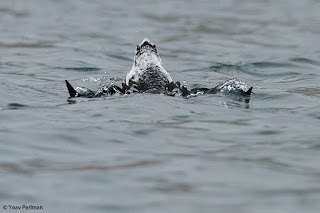 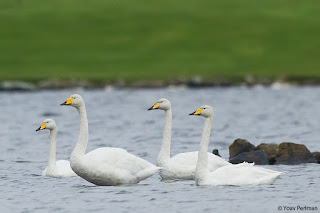 Then suddenly the wind dropped, the rain stopped and the sun came out. It smelt like sibes in the air... We checked Hellendale and Seaview in Lerwick, there were some fresh migrants in - Goldcrests, Chiffchaffs, Blackcaps, Lesser Whitethraot, Grey Wagtail and quite many yellow-brows, but nothing more than that. We decided to give the OBP a miss. There was this Purple Sandpiper roosting with knots on the shoreline: 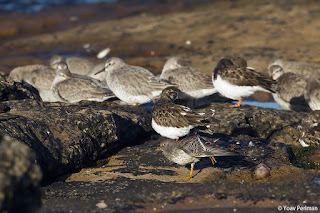 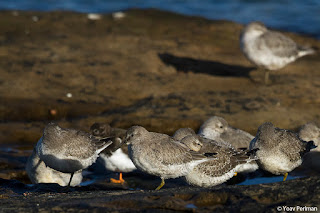 In the afternoon a short walk with Roger in Exanboe produced very little, only a Merlin that flew past. In the evening following a lovely dinner with Becca and Phil (thanks!), I gave a talk to Shetland Bird Club - it was a fun evening!
The wind really dropped this afternoon and the weather from Sunday onwards looks much more promising. So with some new birds today I am optimistic towards the weekend. Good night.
פורסם על ידי Yoav Perlman ב- 12:51 AM