A difficult day today with hard work and less reward compared to yesterday, but still pretty good. Bad weather today - strong SW west and sort of wet most of the time. Started off early. In Paul's garden 5 yellow-brows, they were really everywhere today. By 10:00 I already had about 25. 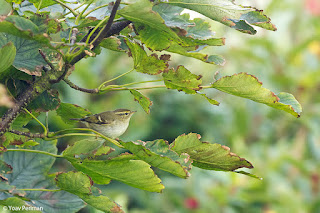 I recorded these two in a duet:

The walk down to Roger's via Virkie was alright but hard work. Birds kept very low and quiet because of the wind. Highlight was a Bluethroat I found in a ditch above Virkie. I flushed it twice, enough to see it was a Bluethroat with the tail pattern etc. but honestly I don't even know if it was a male or female. Nice bird to find but I would trade it happily with a proper sibe. More pipits around today, plus several Redwings and a Fieldfare. Quite a few Pinkfeet went through in the morning, and some landed in the fields for a rest en route from Iceland to Norfolk: 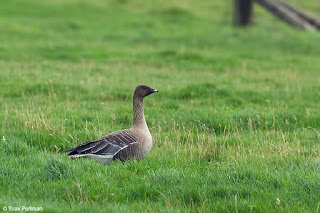 Pool of Virkie had three Grey Plovers, some Barwits etc. Met up with Martin and we walked back to Roger's, more yellow brows... 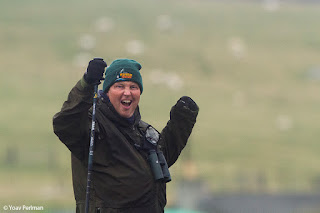 In the afternoon we were determined to see some birds despite the awful weather. We first made the mistake and tried the Arctic Warbler at Weisdale again. Stood around like idiots in horrible wind, watched a Sycamore shaking like crazy and glimpsed the warbler for a split second. We agreed this was not much fun so we went on to watch real, big, showy birds. We started off with gulling at the tip of Weisdale. There were several argentatus herrings, a Little Gull and this hybrid Glaucous X Herring type thing -interesting wingtip pattern, even the unmoulted P10 is odd: 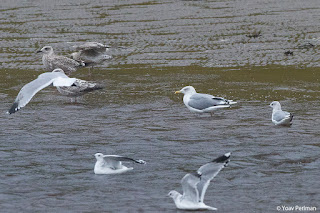 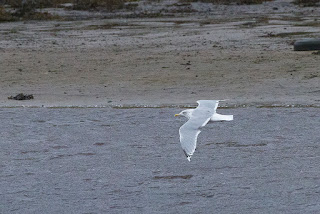 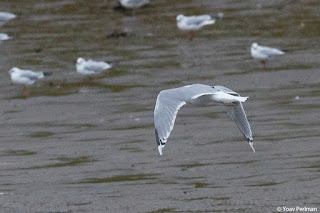 There was this group of Red-breasted Mergansers there, and also 7 Goosanders flew over: 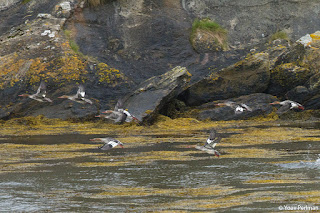 Then we checked ducks on Tingwall Loch. No interesting aythyas among the tufteds, but this juvenile Goldeneye made us get out of the car and grab our scopes. Interesting bird, tiny with small bill, half-developed head shape, and dark eye: 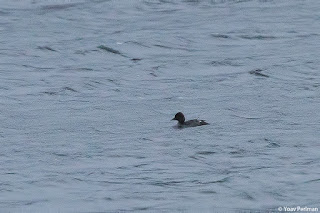 Then in the late afternoon shorebird in Virkie again. More commoner stuff but nothing new.
Hoping for some better weather in the next few days!
פורסם על ידי Yoav Perlman ב- 10:40 PM