I had a week of torture. I sat in front of my computer at work, watching all those rarity reports pouring in from Norfolk, and I just couldn't get out until today. So today I had to decide what to do - to try and check an area with habitat to try and find my own birds, or go cherry-picking? What would you do? And there were many cherries to pick in Norfolk yesterday and today: 2 Red-flanked Bluetails, 3 Daurian Shrikes, Blyth's Reed Warbler, several Pallas's, Radde's, Hume's and Dusky Warblers, Olive-backed Pipit and a few other bits and bobs. That's an impressive line-up! I guess for the blog it would be wiser if I got great shots of these rarities, that I could promote on social media. But eventually I decided to go and try my luck in finding something new. I just know I wouldn't enjoy spending a full day chasing after long-staying rarities (that I don't 'need'). As I left home in Norwich a flock of 120 Redwings flew over, so my expectations were pretty high. I headed out to my regular hunting ground - walked from Stiffkey Campsite almost to Wells and back. The wind was too strong today which kept the birds silent and not very active away from the few sheltered spots. In the sheltered spots it was clear that there were huge numbers of Goldcrests - many new arrivals, feeding in less-than-optimal habitats, and some jumping right by my feet. I quite like this photo - the blackberries and the spider web: 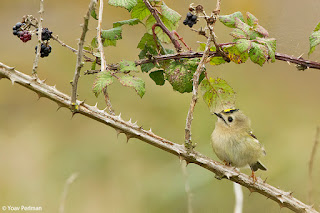 They are just lovely aren't they? Can't have enough of them 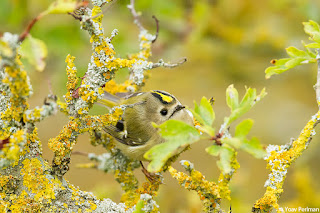 In the campsite woods there was one Yellow-browed Warbler and a Firecerst with the goldcrest flocks. I then started walking west. After a short while I bumped into the Great Grey Shrike but it kept its distance and was very mobile, so no images. There were many thrushes in the trees and bushes, but because of the strong wind they refused to move out of bushes so I guess my estimate of 150 Redwings between Stiffkey and Garden Drove is conservative. There was one Ring Ouzel and one Fieldfare with them. Another Yellow-browed Warbler was somewhere halfway, and I heard and saw briefly the Pallas's Warbler at Garden Grove. It showed badly in the canopy of the large sycamores there, no photos either. There were many finches as well, about 15 Brambling. Other birds of interest were 2 Redstart and 2 Lesser Redpolls. 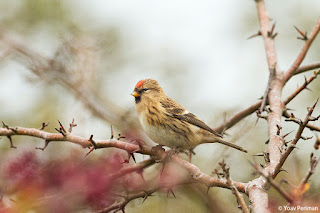 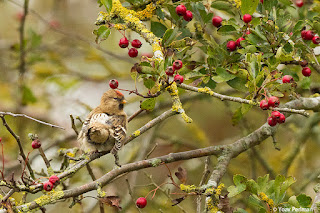 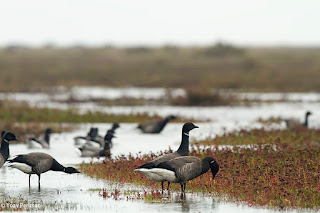 After I was done I had time for a very quick look in Wells Woods. I couldn't bother chasing the rarities there - there were too many birders around, some running - not my cuppa birding. So I birded off the main track for a bit, more thrushes etc. and I bumped into the Hume's Warbler without planning to - heard it calling and it showed badly high up in the trees.
פורסם על ידי Yoav Perlman ב- 12:16 AM