Hot hot hot - but some good migrants going through

This morning I ringed at my site in Ashdod. Weather was terrible - very hot with relative humidity of 200%. As a result I closed the nets very early - it became too hot for the birds already at 08:00. I was pretty busy during the short period when the nets were open. Lots of Reed Warblers, and a mix of other local species and early migrants. As expected a few Kingfishers were flying up and down the creek (my first this autumn), and we caught one.
Kingfisher - 1cy male 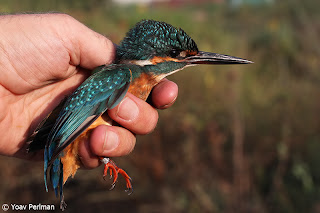 The only surprise this morning involved a Thrush Nightingale. They normally don't arrive here before late August, but this bird is not an early autumn migrant but a stranded spring migrant that got stuck here for some reason and could not complete its migration. 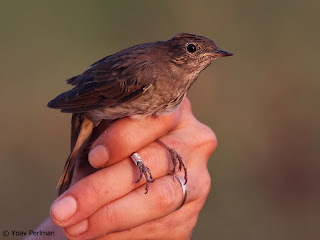 It was at the end of its complete moult - primaries almost complete, and four secondaries still growing. It was in heavy body moult too that's why it's scruffy-looking. Note that the moulted GC and tertails have these small buff tips, normally associated with young birds. 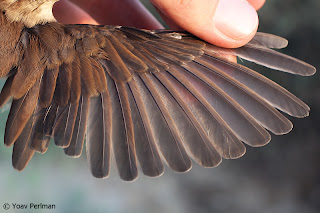 Thanks to Arad and Shlomo for their sweat this morning.
פורסם על ידי Yoav Perlman ב- 8:31 PM