Rage against the machine

Last night I was out monitoring Nubian Nightjar. It was a long and eventful night, and after working with these nightjars for almost a decade now, for me this was a climax - both biologically and emotionally.

I started off near Hazeva, in the Shezaf Reserve. I met up with Yitzhak Ben Mocha and Oded Keynan, who had recently some anecdotal observations of Nubian nightjars in the reserve. Amazingly we found two or three pairs in full breeding activity - they were missing from this area for about 20 years as a result of massive destruction of their habitat there. We found them last night in small patches of suitable habitat; one site was rehabilitated a few years ago by some locals including Oded, and it was great to see the results of this work. More on this to come.
One great bonus was a superb observation of a wolf, sitting around and watching us.

After I was done there I continued to Neot Hakikar, arriving at about 23:00. Weather was fantastic, moonlight powerful, and nightjar activity was at its peak. This was the best night I have ever had there - I saw 14 pairs, out of about 20 pairs breeding there. Every possible territory I checked held a territorial pair. Most pairs were busy courting and mating - second cycle I guess. I did not see any youngs with parents at all, I assume they have dispersed already.
Sadly, two of the pairs I had are doomed - they chose to breed in a minefield that will be cleared next month. It was so sad for me to see them. Nightjars, like all swift-relatives, live for many years. I know these pairs intimately - I had transmitters on both pairs during my MSc research some years ago, and yesterday I saw a ringed bird - must be one of them. They are like old friends of mine and I almost started crying when they were courting, hovering and calling, right over my head and two meters away from me on the ground, not knowing that very soon their nests wil be chopped up and they will have to move somewhere else. To think that in just a few weeks their habitat will get torn to bits is just terrible, but apparently nothing can be done against it.
One very exciting find last night was a breeding pair of Egyptian Nightjars - this is the first indication of breeding in Israel since 1991. I will follow up on these birds during the next few nights.

Apart for not having anyone to share these experiences with me, I had nobody to hold the torch for me. So I discovered that it is very difficult to take photographs when one has to hold one's torch by oneself. This is the least-terrible image I managed. I have some sound recording too, hope to overcome the technical obstacles of editing the sound files soon. 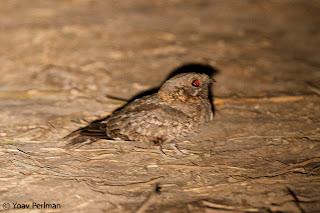