The main motivation for this Turkey trip was Brown Fish Owl. Until the 1970's Brown Fish Owl bred in riverine forest in northern Israel, but they were shot till the last one in 1975 and became extinct. I started birding just a few years later, so this is quite a mythical bird for me to see. I saw plenty in SE Asia but to see it here in the WP, and so close to Israel, is very exciting.
We took a boat tour with Ozcan Kilic of Vigotours - he certainly did the job, the boat was comfortable and suitable for this trip. Level of guiding (info treasmitted by the guide) was rather minimal though. Ozcan picked us up from our hotel at Yesil Vadi early in the morning. We drove to Oymapinar Reservoir, and sailed a boat to Grand Canyon (I think it's grand and not green but not sure...). No California Condors were seen. There is another pair of owls that bred in Little Canyon but apparenly their chicks had already fledged and we went for the Grand Canyon family.
The owls were found exactly where they were supposed to be. We were all very thrilled to see them - dream bird. So powerful and so beautiful. We had both adults (female huge! Like a bloody Steller's Sea Eagle) and one juvenile. The juv was in full size and already flying but apparently still attached to its parents.
At first light they were still moving around quite a bit, including flights accross the gorge, but light was too bad for my camera. Some nice poses on an exposed rock: 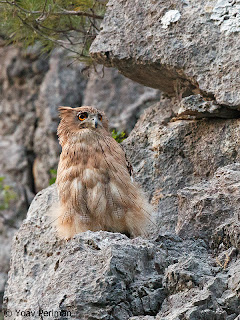 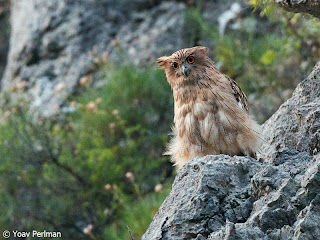 Later on they all settled down to roost - one adult out of sight, the second on an exposed branch, and the juvenile inside a Nerium oleander bush. 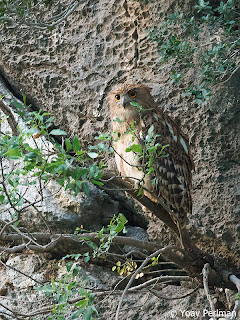 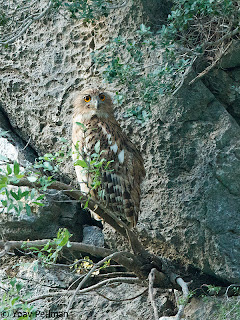 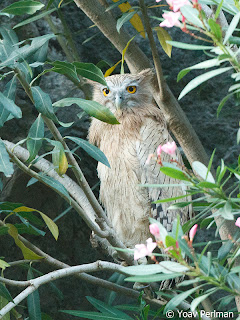 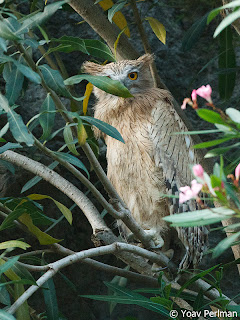 We stayed there for about half an hour. The light did not improve much and all images were taken in very difficult condition, hence the mediocre results.
There were lots of other birds seen and heard during the trip. There's a nice colony of Yellow-legged Gull on an island at the entrance to the canyon, with one Baltic Gull among them. On the gorge wall we saw and heard Western Rock and Krueper's Nuthatches, Rock Buntings, Crag Martins etc. Rony enriched the aquatic fauna by dropping his flash into the water. 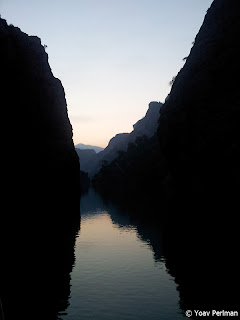 We had a good time on the boat. We were joined by some British celebrities - Lee Evans, Garry Bagnell and Keith Vinicombe (the latter identified only retrospectively from photographs). 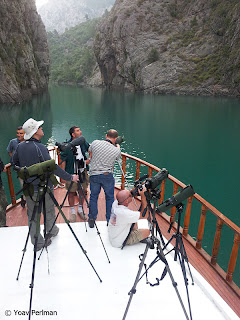 So with Brown Fish Owl in the bag our trip was already a great success, and from here it could only improve. And it improved indeed...
פורסם על ידי Yoav Perlman ב- 6:56 AM