last night I returned to Neot Hakikar to complete my monitoring duties for this season. I was joined by Jens from Denmark. We met up early enough for some afternnon birding. First we went to check whether the local Sooty Falcons have already returned to their territory, and indeed we found the male there. He was doing nothing and looked quite bored - perhaps the female has not returned yet. This is my humble attempt to phonescope it: 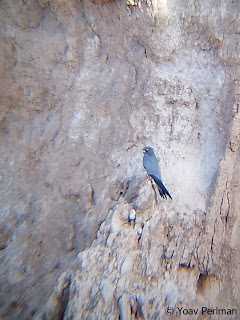 Down in the valley, a small marsh had some good birds in it. Late migrants included Whiskered Tern and Great Egret. Good local birds included many Namaqua Doves, Clamorous Reed Warblers, Little Bitterns and a single Indian Silverbill. 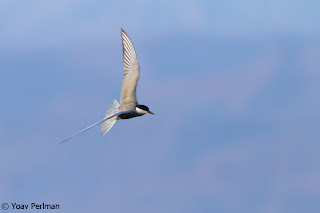 After nightfall we started working on Nubian Nightjar territories I hadn't visited the previous night. Again, we had a fantastic show - all nightjar families were in place and were very active in the perfect conditions - full moon, pleasent temperatures, no wind and massive moth activity. We also returned to some territories that needed a second look, and I was very happy to see at least four families with recently-fledged youngs. 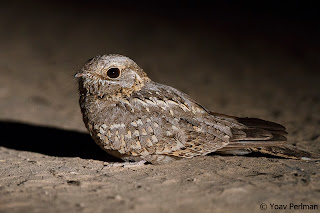 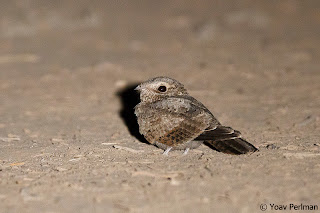 Unfortunately we were not able to relocate the egyptians, but I hope to return there again next week.

In total, this is a good breeding season for the nightjars, and now it's my job to protect as much of the habitat as possible. The next few months are expected to be critical and dramatic with the planning process reaching its climax - I hope to bring good news soon.
Thanks to Jens for his great company and help during the long night.