One of those gulls

Yesterday I had some time for birding. Started off at Ashdod. Shorebirds were rather few. First gulls have arrived. I had this very interesting grey-backed gull. Relevant possibilities are Siberian Gull and intermedius Lesser Black-backed. It was a small and delicate gull, similar in size to a female Baltic Gull it sat next to. Very different from typical bull-sized siberians. Moult stage is possible for both - P1 and P2 moulted, rest of moult suspended. Very deep grey tongues on P7 and P6 are better for siberian. To my eyes head shape and bill structure are better for intermedius. 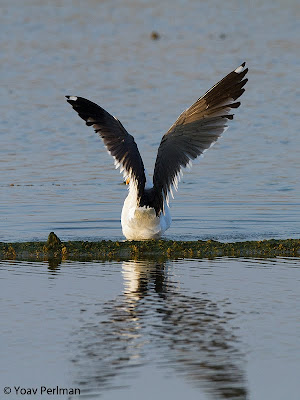 Siberian Gull is a common migrant and winter visitor at Ashdod. There are only two positive Israeli records of intermedius, both were identified by their read-rings. I am sure it is possible to get them in Israel, or at least mixed fuscus-intermedius individuals (we get some birds from mixed colonies in N Norway).
When KMO visited Israel in March 2010 we had a good day of gulling at Ashdod. When we saw similar birds to this he identified them as 'extremely small heuglini'. I find it hard to believe that pure heuglini could be so tiny (blasphemy!). I still don't know of a positive way to separte heuglini and intermedius. Any opinions on this bird are most welcome.
Later I visited some reservoirs in the Judean Plains. Good selection of shorebirds, including 16 Collared Pratincoles and many marsh terns.
פורסם על ידי Yoav Perlman ב- 7:23 PM