This winter I am coordinating for the IOC a national wintering raptors census. I am doing one region myself, close to where I live - the Judean Plains. This region is great for wintering raptors, many of them concentrated around the many reservoirs.
I spent the last two full days counting raptors. Totals were not bad - 14 species, the commonest being Kestrel and Common Buzzard. I paid most attention to eagles and harriers. This year is terrible for Hen Harriers, and a roost I counted this evening had only 8 birds (compared to 70-80 in a normal year). Marsh Harriers are present in larger numbers; yesterday I counted 86 in the main roost. 4 Merlins were a nice addition to the roost.
Eagles were present in rather good numbers; not Hula numbers but not bad at all. I had a total of 19 Greater Spotted Eagles and 12 Eastern Imperials (which is actually pretty good). I did my best to age each individual. Building an accurate database over the years will allow us to perform population dynamics analyses.
In addition, each bird got itself photographed, in order to identify them specifically, which is very important for counting as they move around quite a bit during the day. Each individual has its own moult and wear pattern. For instance, this bird has P8 on left wing notched, and it's moulting P1, outermost secondary and T1. I saw this bird yesterday near Tsor'a, and today saw it again about 30 km south. I know this is a crap image but it demonstrates this field method well. 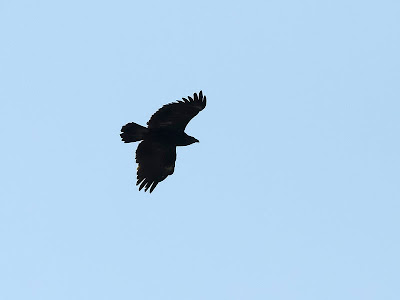